Ready for the dip!

Got off my lazy butt, dug out my old Heritage Galacta 25mm figures which haven't seen the light of day in nearly three decades and decided to strip them and repaint them.  I've got a metal tub and some heavy duty paint stripper standing by so before they get dipped and scrubbed I thought I'd post my "loose" collection.  I've got a few unopened blister packs that I'm going to add when I can but for now this should be enough to get a game or two going with my family and friends. 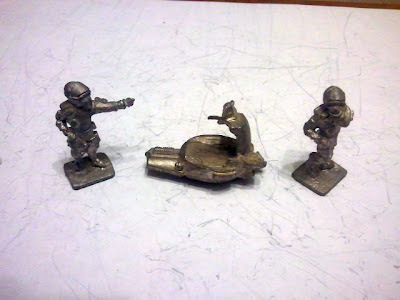 Some sci-fi cops on their future Segway.  Yes, even in the future law enforcement will have to put up with having to deal with the stupidity generated by well meaning people who have good intentions but haven't served a single day behind a badge and therefore don't know jack crap about what it takes to either be a police officer or get the job done.  There's a third officer that I found after I took this picture and speaking of the picture, I think the one on the left is saying "YOU ride the Segway!" and the other one is saying "Negative.  I've got some parking tickets to write over by that doughnut shop." 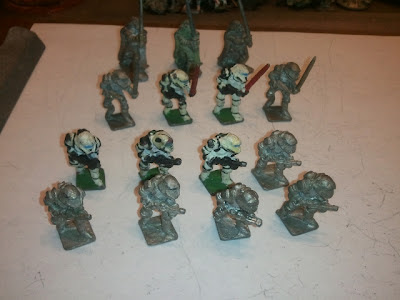 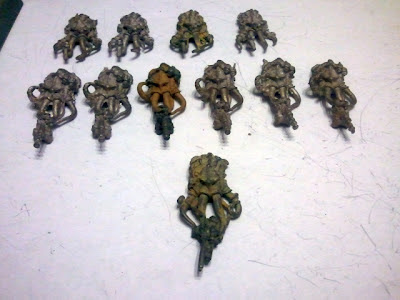 The Octopoids, some of my favorite pieces in the game, appear next to slither into the chemical soup.  From rear to front we have four Octopoid Squad Leaders, six Octopoid Grenadiers (with grenades, grenade bandoliers, and big ass blast cannon), and up front a single Octopoid Trooper (with lazer repeater).  How did I get so many Grenadiers and just one single Trooper?  Weird. 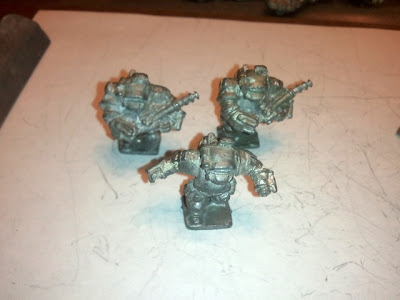 Three Imperial Heavy Power Armor Troops.  There's so much metal in these three pieces that I swear if you dropped these on your foot you'd be looking at X-rays and a cast in your future. 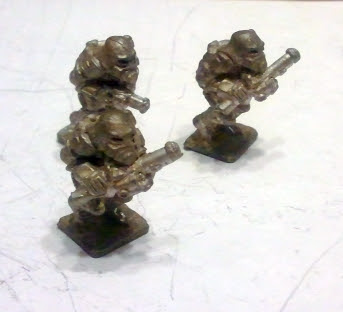 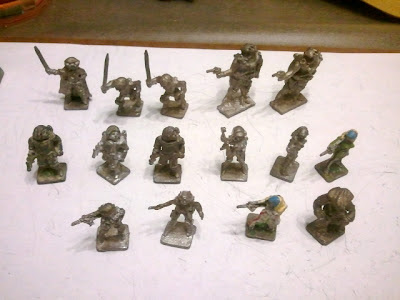 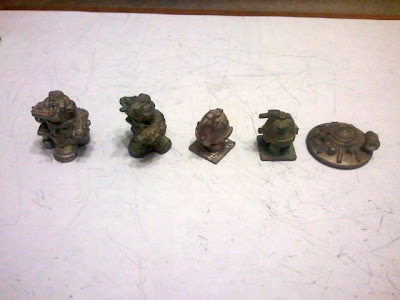 The Robot faction weighs in with two Warbots, two smaller Security Bots and a Jammer Bot which is probably one of the worst casts and most useless figure in the game (short of the android which I didn't even bother to break out of storage).  Just for fun I put the Jammer Bot on top of the Warbot and it looked a lot scarier ... kind of like a cross between The Terminator and Mayor MacCheese. 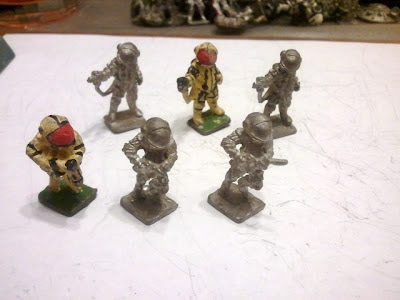 The Planetary Strikers round out the bath  schedule with three Striker Officers and three Planetary Strikers.  I need at least three more Planetary Strikers to have three teams ... future purchase but since I tend to play with the more mainstream classic characters I'd rather just buy some more Imperial Stormtroopers instead.  Nothing like a game where a handful of Rebels are facing almost endless waves of Imperials.

Update - I just pulled out my five (5!!!) unopened blister packs of figures, collected over the last twenty-five years from rare hobby shop finds in my travels across this once great nation.  I almost hate to open these up, it's like vandalizing a part of history ... 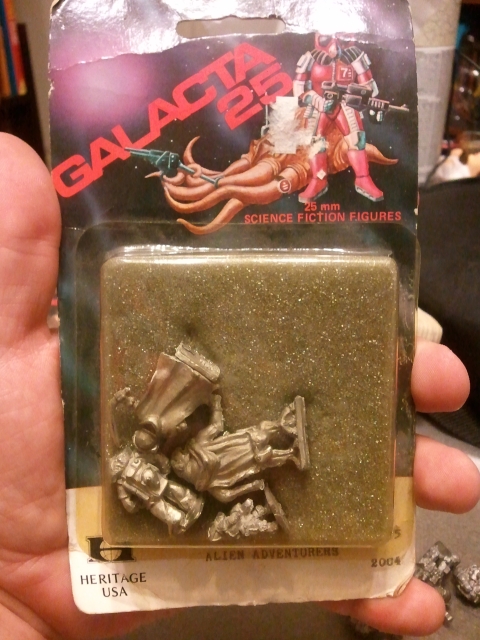 Heritage USA "ALIEN ADVENTURERS" 25mm scale Product # 2004 -  Original price stamped at $3.95 - includes (clockwise from top) Nausican Swordsman (with bent energy saber due to years of being slammed against the other figures in the pack), Greater Saurian, Squogg ("Squirrel Dog" - figure not used in MY games) and Lesser Saurian (with his back turned to us ... in fact, they've all got their backs turned to us ... stuck up figures). 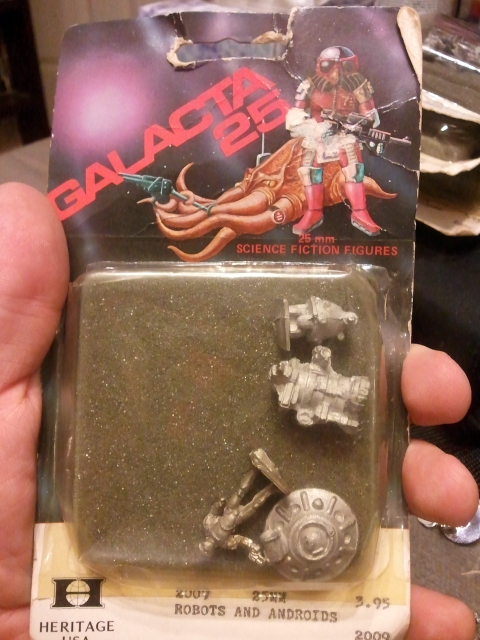 Heritage USA "ROBOTS AND ANDROIDS" 25mm scale Product # 2007 -  Original price stamped at $3.95 - this pack contains from top to bottom Security Robot, Warbot, Android and Jammerbot.  The title is kind of misleading since there is only one android and it looks like a cross between C3PO and Maria from "Metropolis".  I don't use the Androids in my games ... if I do, I'm going to paint it up in space cop colors and stick it with the police as a supervisor or maybe some kind of traffic bot. 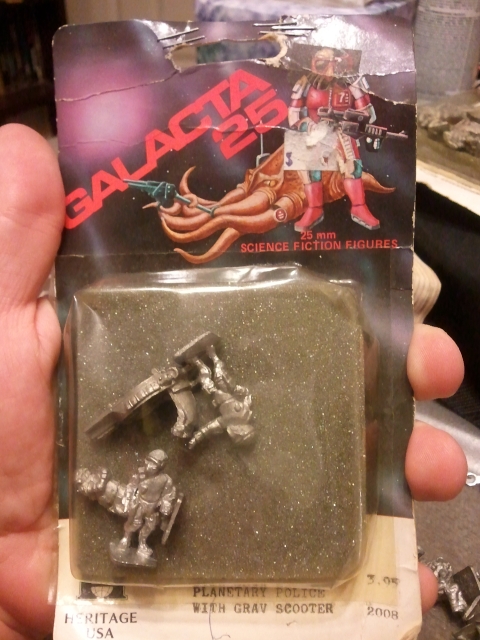 Heritage USA "PLANETARY POLICE WITH GRAV SCOOTER" 25mm scale Product # 2008 -  Original price stamped at $3.95 - this pack contains three Planetary Police Officers and one Grav Scooter.  I'm still wondering how to fit these guys into my games ... they just seem out of place so maybe I'll just cobble up a 25mm diorama with them in it instead.  In fact, I don't think that I'm the only one who thinks this way as evidenced by the fact that this particular blister pack was taken off the rack and put back so many times that the store owners had to reinforce the punch hole with four staples just to keep it on the rack. 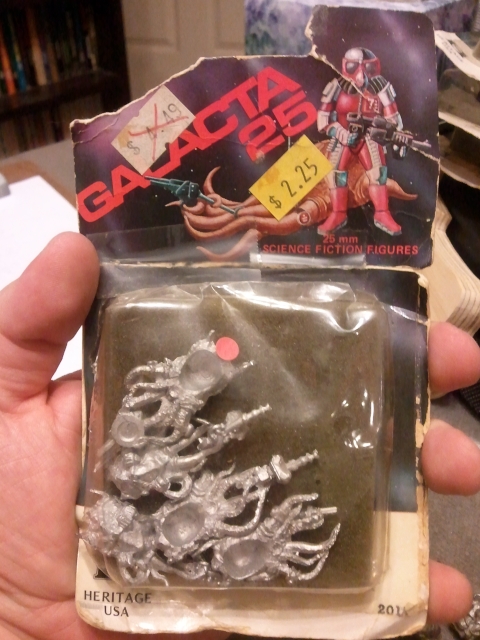 Heritage USA "ALIEN OCTOPOIDS" 25mm scale Product # 2011 -  No original price stamp but originally sold at $4.49 and marked down to $2.25 - this pack contains a Squad Leader, three Grenadiers and a Trooper so the ratio of Grenadiers to Troopers seems to be about 3 to 1.  No wonder I have so many Grenadiers and so few troopers.  I need more Octopoid Troopers! 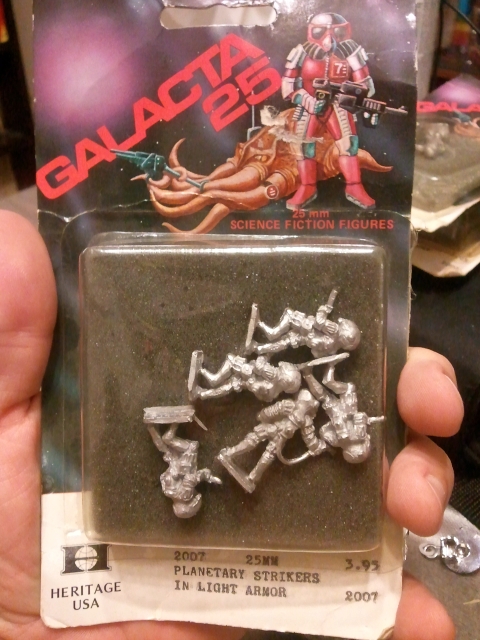 I remember when my local hobby shop had racks of these blister packs of figures hanging up but that was easily 30 years ago.  Good memories of good times.  Looks like I've got a lot of painting ahead of me ...
Posted by Christopher T. Shields at 3:28 PM