"Doomsday +1" was a post apocalyptic science fiction comic series published by the small, Derby, Connecticut-based publisher Charlton Comics.  The series ran for twelve issues with the first six issues running from July 1975 to May 1976 while the second six issues were simply reprints of the first six issues labeled 7 to 12. The reprints ran from June 1978 to May 1979. 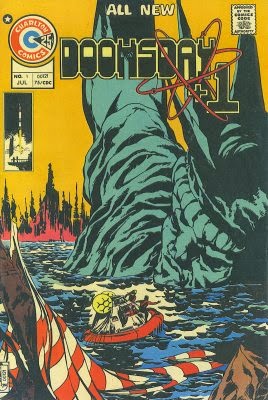 The cover of issue one is wrong ... the astronauts did not arrive back in
New York and this art was clearly a homage / play to the
highly successful "Planet of the Apes" franchise.

"Doomsday +1" is probably best known as the first original, color-comics series by artist John Byrne who would eventually become a major industry figure.  The series was created by writer Joe Gill with John Byrne doing the penciling and inking while George Wildman served as the editor.

Byrne, serving as letterer, used the pseudonym "Byrne Robotics" while working on issues #4-6 (later reprinted as issues #10-12). The credits for issue #5 show the artwork as "Art: Byrne Robotics with technical assistance from Patterson-75", a pseudonym then for Bruce Patterson who provided some degree of inking.  Byrne drew the covers of issues #2-6, with the cover of issue #1 variously credited to Byrne and to Tom Sutton. Issues #7 and #11 featured re-colored reprints of Byrne covers, while issues #8-10 and #12 featured "new" covers created by blowing up panels of interior artwork from the stories. 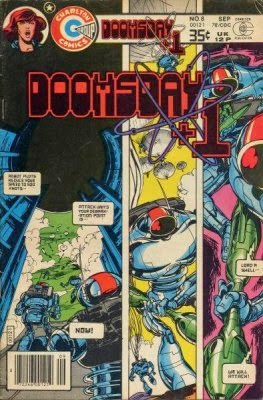 The stories ran from 22 to 23 pages with most issues also containing a two-page text backup — either a story featuring the main characters or a non-fiction featurette. The backup story in issue #5 consisted of two comic pages, drawn by Steve Ditko, of "real world" paranormal vignettes.  These stories were, by and large, nothing more than filler. 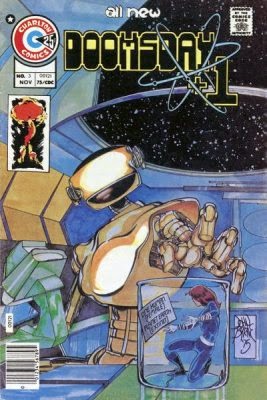 Synopsis:  "Doomsday +1" features some of my favorite genres; atomic holocaust, survival, astronauts returning to a devastated Earth and a good dose of science fiction / science fantasy thrown in.  "Doomsday +1" occurs in the near future (then the late '70's / early '80's) in which a South American despot named Rykos, facing a military coup de tat, launches his sole two atomic missiles on the world.  The atomic missiles are targeted on New York City in the United States and Moscow in the U.S.S.R. Both cities are destroyed.  The two superpowers, each believing the other has launched a first strike, launch their own atomic arsenals at each other in retaliation. The truth becomes known and American president Cole along with Russian premier Mikhail realize their errors but it is too late; the fully automated nuclear-missile systems of each country can not be countermanded or turned off.

The world is doomed to atomic holocaust. 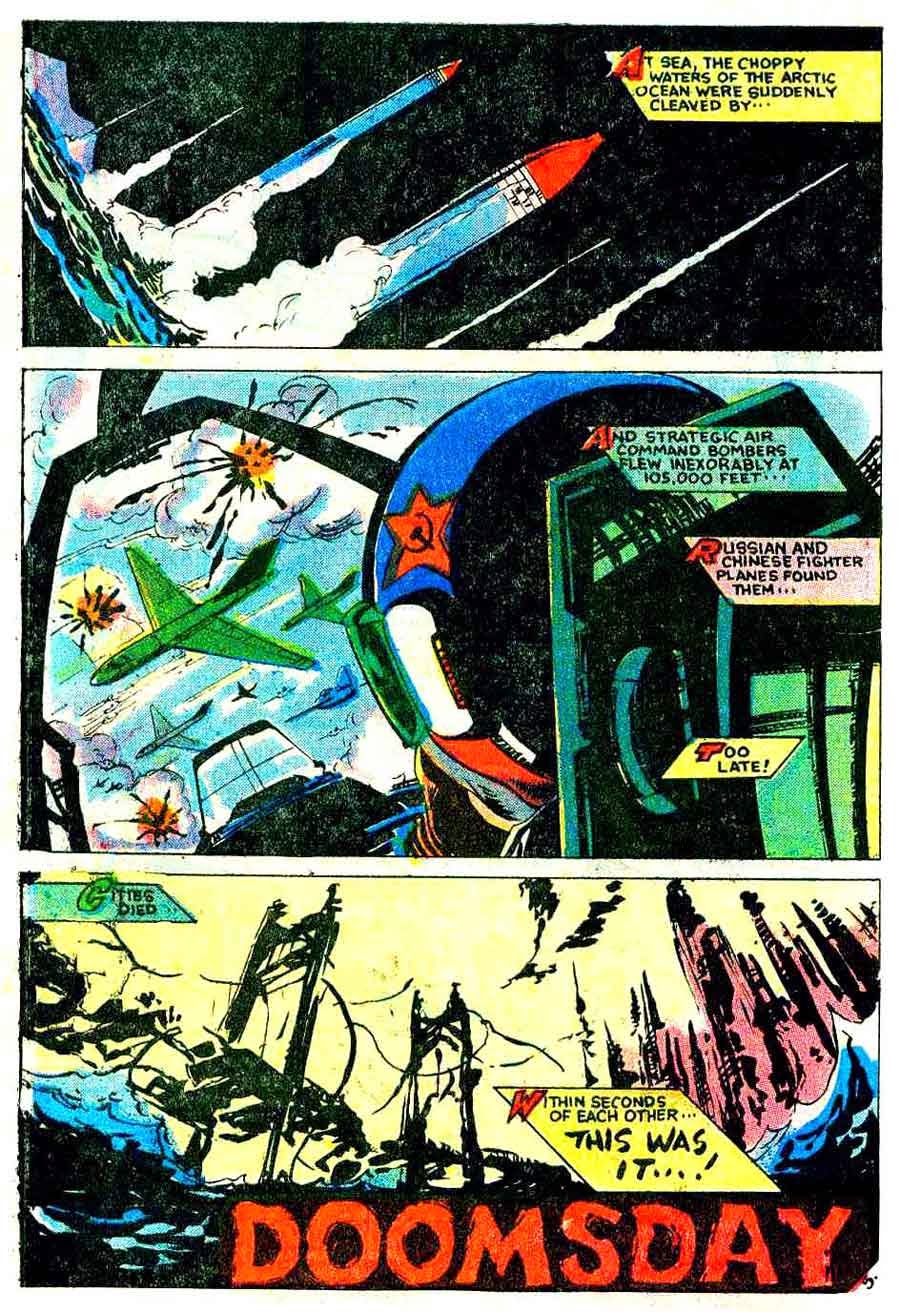 Only hours before the apocalypse begins, a Saturn VI rocket bearing three astronauts launches from Cape Kennedy in Florida.  Onboard the Apollo style command module are three astronauts: Captain Boyd Ellis, United States Air Force; his fiancée, Jill Malden; and Japanese physicist Ikei Yashida.  All three astronauts witness the atomic holocaust from the safety of orbit.  Weeks later, after the post-apocalyptic radiation has subsided to safe levels, their space capsule lands upon a melting Greenland ice field.  Seeking shelter, the three astronauts make it across the ice field and encounter a wooly mammoth, frozen alive for thousands of years and now thawed due to the atomic exchange.  They are saved by an equally ancient Goth named "Kuno" who joins the party but is the man lost in time among all the high technology that the astronauts depend on to survive.

Crossing over into Canada using a sail boat / yacht, they are attacked by a robot operated fighter jet.  Arriving at a Royal Canadian Air Force base, they make the base their home only to discover that a crazed Russian scientist / cyborg has them in his sights.  The Russian cyborg sends hundreds of robot paratrooper infantry to attack the RCAF base and the astronauts. 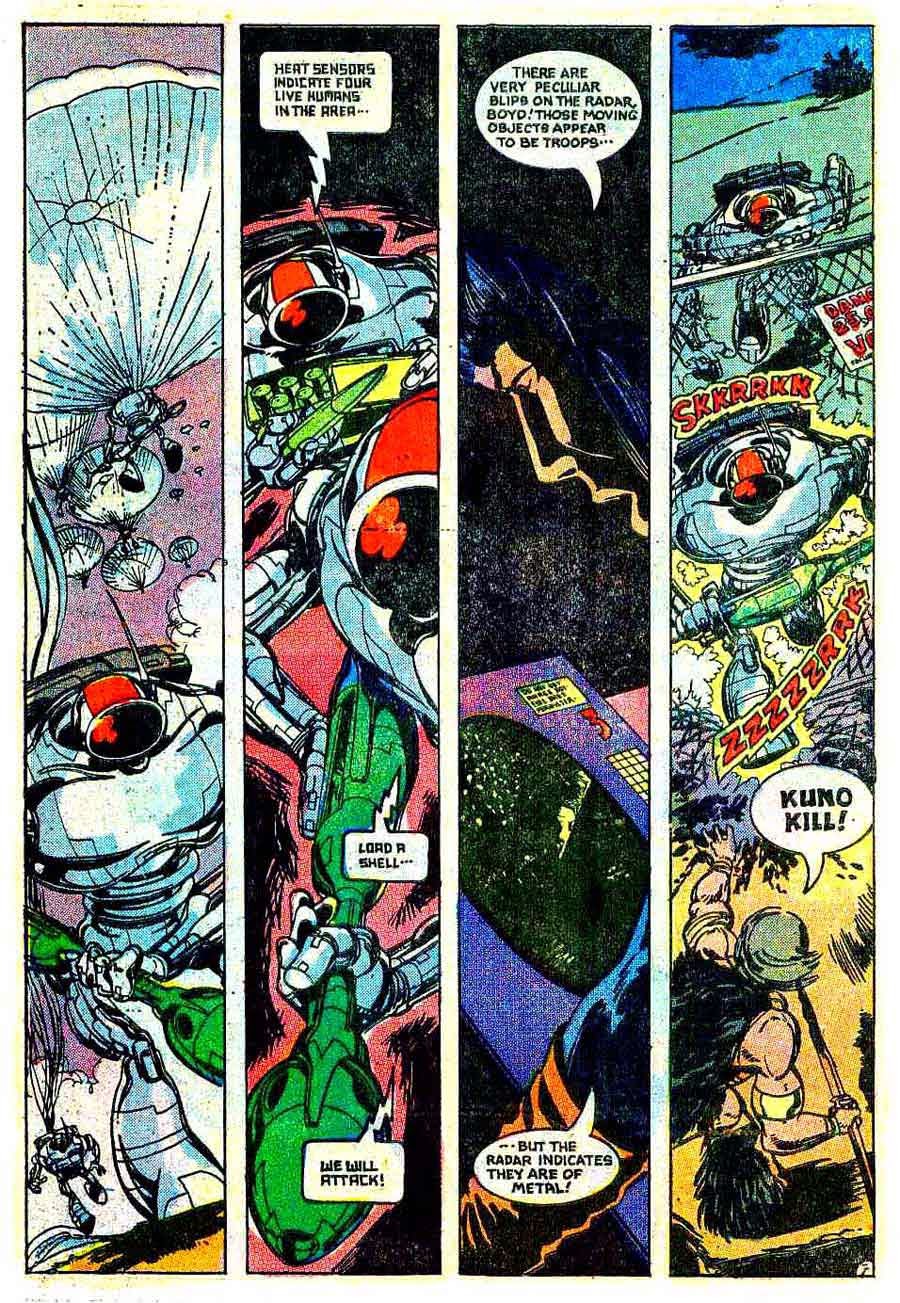 Boyd Ellis uses a RCAF jet fighter to strafe the robots from the air while Jill, Ikei and Kuno make ground attacks using laser rifles (backpack mounted power packs) and an atomic powered tank (with a flamethrower cannon).  Boyd Ellis must land his jet when he is low on supplies and he is captured by the robots and taken to Russia to be interrogated by the Russian Cyborg.  Jill, Ikei and Kuno all board a RCAF supersonic transport, travel to Russia and with the help of Boyd, defeat the crazed cyborg and escape back to Canada.  The cyborg threatens revenge but Boyd tells him that if he tries anything that Boyd and the others will return and nuke the cyborg thus offering mutual assured destruction.

Back at the base, Boyd and Jill realize that they have grown apart and may not be the couple that they once planned to be.  Jill seems taken with Kuno now and Ikei, long jealous of Jill, is ready to move in on the vacant spot that she is leaving in Boyd's life.

The first two books in the series (detailed above) are probably the best in the way of story telling.  Later issues tended to get a little bit silly.  Plots included meeting robot guardians from a highly advanced galactic civilization who are here to pass judgment on humans for their folly (and let the astronauts teach them the error of their ways).  The astronauts deal with an underwater city being attacked by ancient aquatic enemies, visitors from a future utopia and of course, a group of other American survivors who want to do away with Boyd and Kuno and keep the women for their own needs and pleasures.

Overall, "Doomsday +1" pleases on a base level that, as a child, I found hard to ignore.  This series pandered to all of my post apocalyptic day dreams and my original copies of this short-lived series are very dog eared, especially issue #2 with the epic air and land fight against the Russian robot death machines.  The art is okay (Charlton was never known for its fantastic art quality) but the story, at least the first two or three issues) goes far in supporting what the art can't convey.

And it's John Byrne whose art is iconic and it's early John Byrne so that counts for something as well.
Posted by Christopher T. Shields at 10:49 PM 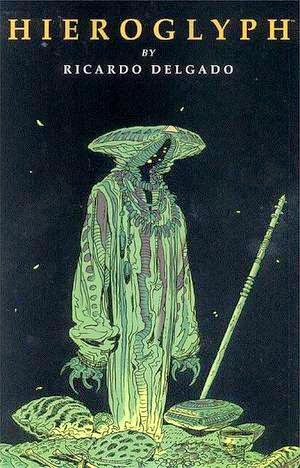 Digging through the piles of crap that I need to sort in my study I came across a four part sci-fi comic series that I had almost forgotten about.

As a child I used to read comic books a lot but the older I got the less I read and the less I collected them.  Super heroes don't do anything for me, never really did so while I enjoy the occasional "Batman", "Spiderman", "Iron Man" and "Avengers" movie you won't find any of those comics in my meager collection.  No, I grew up reading stuff like "The Losers", "Sgt. Rock", "The Unknown Soldier", "Weird War Tales", "Tales of the Haunted Tank", etc.  Later, in my late teens and early twenties my taste in comics both waned and got pretty picky to the point that I might get a few comics a year and those comics would have to be pretty frigging outstanding.  They were almost invariably science fiction ...  This curve of decline of interest in collecting comics / required quality of comic to be collected only grew as I got older.

I'm in a comic / hobby shop and I see the first issue of Ricardo Delgado's "Hieroglyph".  I can't say that the cover is the greatest in the world but being a fan of all things weird and Cthulhu-ian I was intrigued so I picked it off the rack and gave it a readsy.  I was impressed with Delgado's artwork.  The story followed an astronaut from Earth on some vague mission to explore the universe.  He's separated from his family by time and space.  He has a giant "mothership" in orbit and he takes a shuttle down to the latest planet he's supposed to investigate / catalog.

The shuttle is the size of a B2 stealth bomber (and looks amazingly like a B2 stealth bomber).  Landing on the planet he muses that he's going to be bored, he'll get this planet cataloged quick and then be on his way to yet another boring world in a long line of boring worlds until his mission is up and he can get back to his wife and two kids.  Shortly after that, everything changes and the astronaut discovers that not only is the planet not dead but that it has untold amounts of different lifeforms in types that defy the imagination.  The astronaut also quickly becomes part of a holy war fought over a pentagon shaped talisman with unknown powers but powers that every faction on the planet is willing to go to extremes to possess. 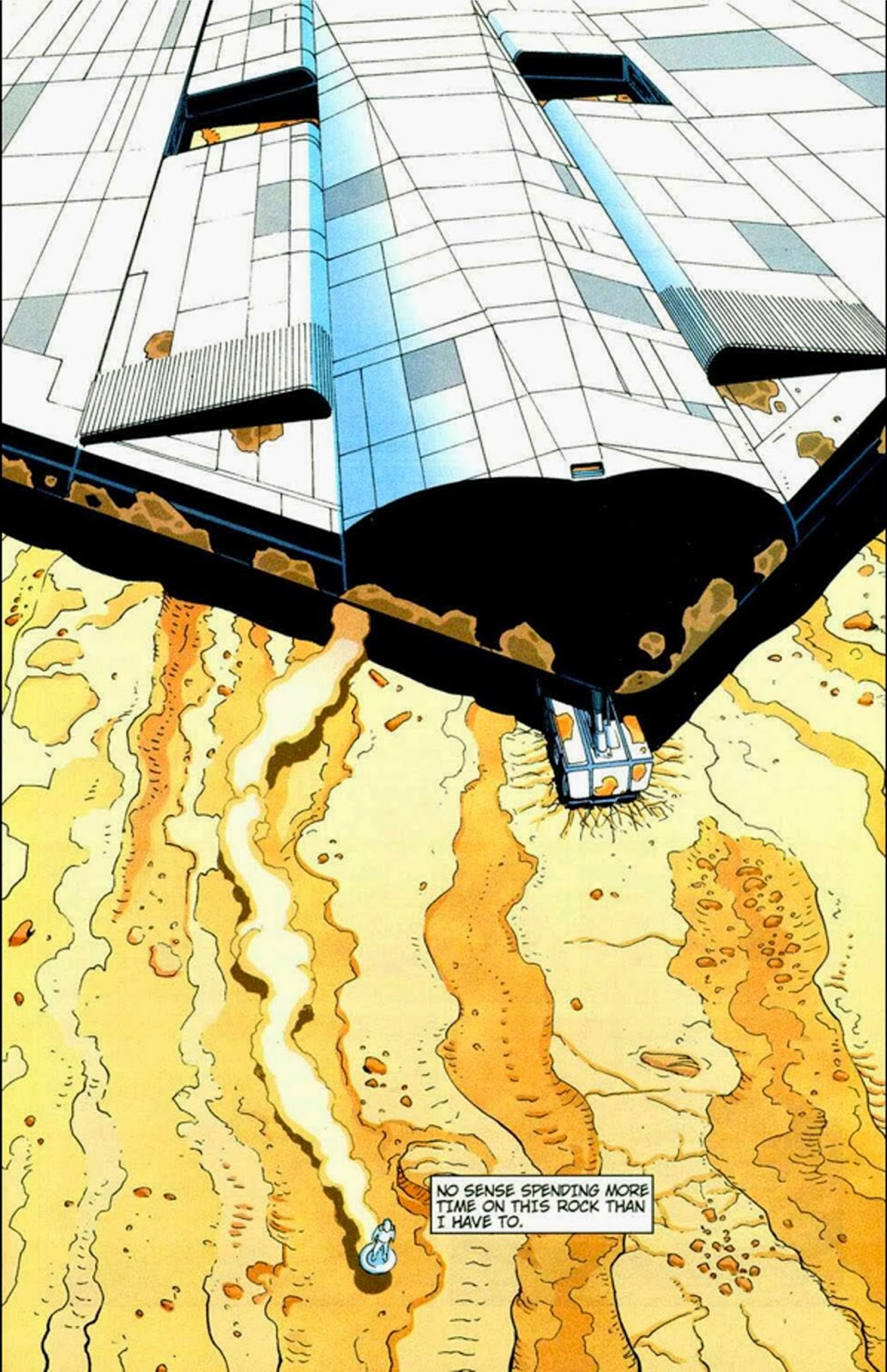 The premise is simple and a bit loose but the artwork is delightful.  Taken from Delgado's fascination with the wonders of ancient Egypt, the art of "Hieroglyph" focuses on the grand and the immense.  Going into space, let alone flight to other stars is not a small feat of technology yet despite all the amazing advances of science and engineering that Delgado has given to the Astronaut ... all of that seems dwarfed, literally, by the immensity of the ruins that the Astronaut continually comes across.  Ancient alien temples, burial chambers of long dead alien rulers, weird alien hieroglyphs, fossilized bones stuck in strata of rocks ... it blows not only the Astronaut's mind but the reader's mind as well. 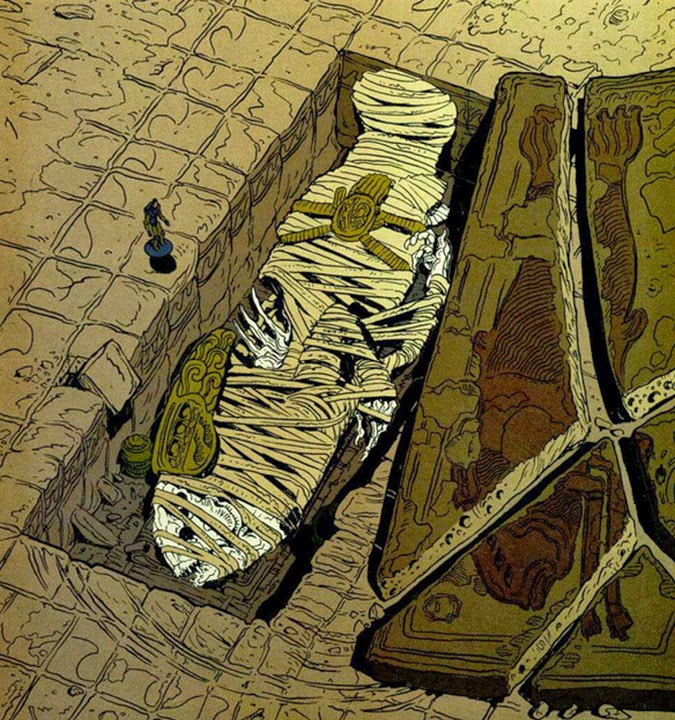 While the artwork is not as tight or sharp edged as Frank Miller and Geoff Darrow's "Hardboiled" but similar in nature in that the visuals tell the story and the text is really only there to join certain ideas together and sometimes to speed things along when the visuals bog.  It's not the "Blade Runner" meets "Where's Waldo" of "Hardboiled", more like an epic tour of an amazing alien panorama where the details are not tiny but rather vast and sweeping visuals.

Trust me, it works and Delgado's artwork would have been right at home in the late 1970's sharing pages of "Heavy Metal" magazine with the likes of Moebius, Moreno and even Corben. 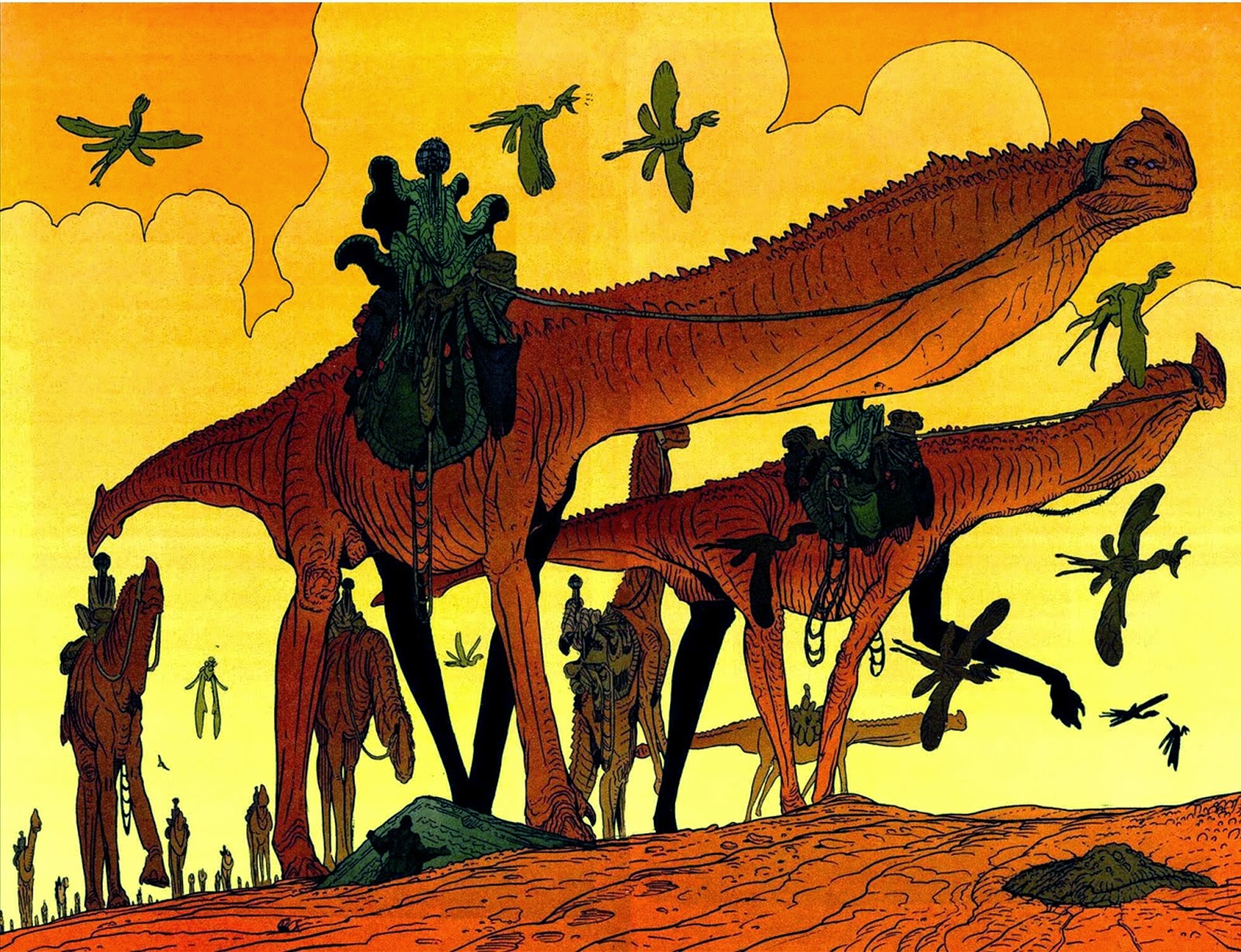 "Hieroglyph" has plenty of artwork and eye candy.  It lacks a whiney protagonist which endears it to me because I myself am a strong individual who deplores whiney or useless people.  I find it hard to believe that someone can go through something as hard as astronaut training only to wind up some blubbering, inwards collapsing wimp at the first sign of trouble.  Such is not the hero astronaut of Delgado's "Hieroglyph".  No, the astronaut faces his fate / destiny with little or no whining, not the usual liberal limp wristed, hand wringing, soul searching, self-defeating, self-loathing pseudo heroes that the insipid pop culture of our once great society has forced upon us lately.  Even for a nearly 15 year old comic series, it's refreshing to see the main character show some stoic traits, accept his fate and deal with it. 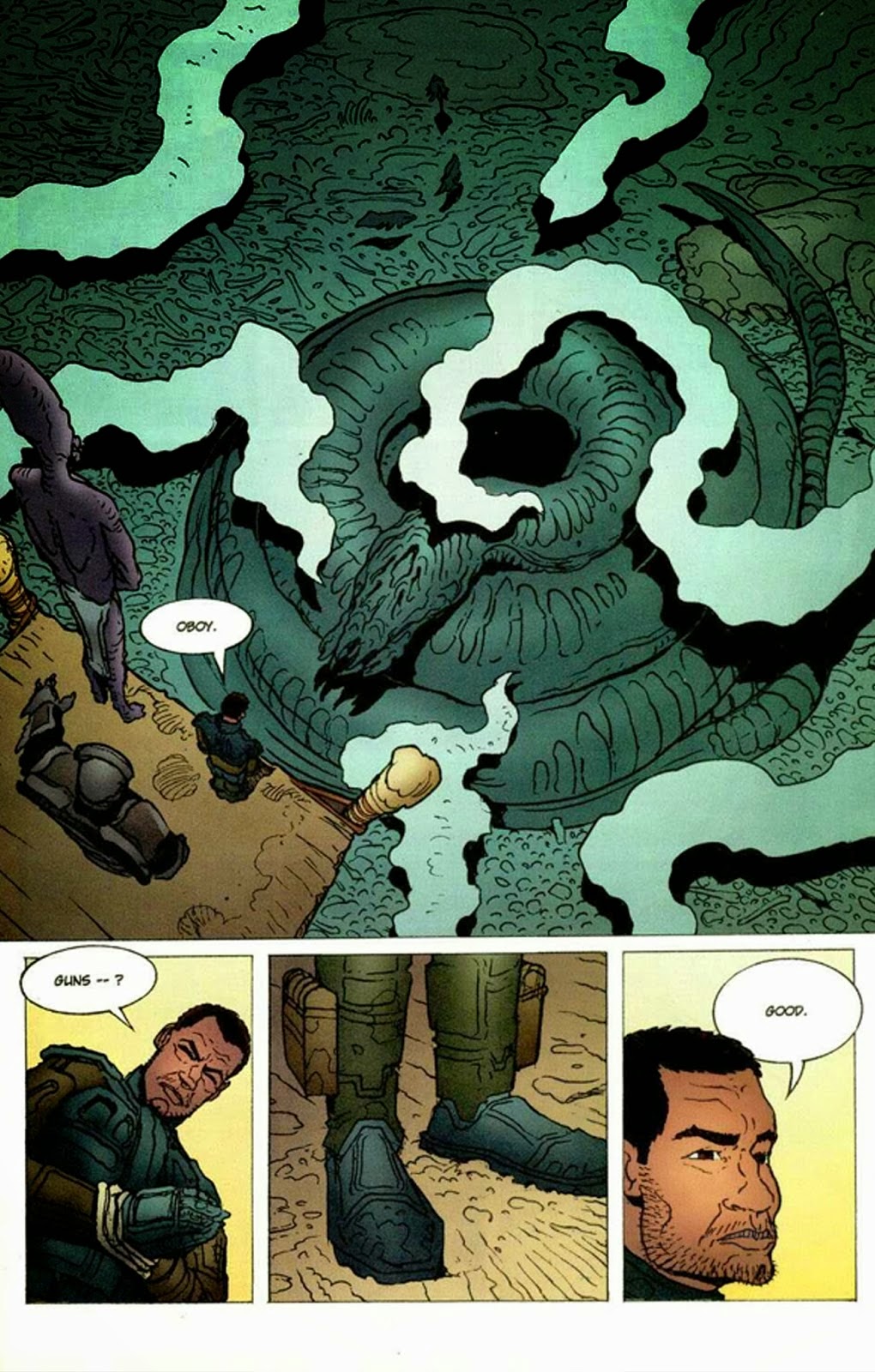 If any story cries out to be released as a complete trade paperback it is "Hieroglyph."  I have read where finding this series is kind of difficult.  I can't tell you because I collected it month by month when it was first published.

Delgado has a blog if you wish to know more about him.  Find it here.

Final verdict?  If you're picky like me about comics and you like great art and lost astronauts then "Hieroglyph" is probably worth checking out and collecting.  Perhaps Delgado will do a sequel but with a decade and a half so far those hopes grow dimmer and dimmer.