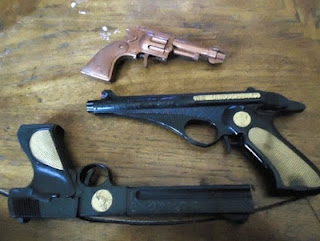 Recently while looking on Ebay I came across an auction for three old Knicker Bocker brand toy guns.  The price was right, at just ten bux plus shipping and fondling and so I picked them up as the only bidder.  The problem is that all three are broken in some form or the other ... the six shooter at top is missing its trigger guard, the big "auto-mag" on the bottom is missing part of the back side of the barrel (other side not shown, exposing the rusty spring that used to propel what looks like a sizable suction cup tipped dart) and the middle pistol is missing its trigger ... among other things.

I purchased this lot for the middle pistol because something about it stirred a childhood memory ... these guns are all from the late '60's so they were probably well played with by the time I was old enough to enjoy them in the early '70's and I swear that when I lived in Jackson, MS from late '74 till the late part of '76 that one of my friends had the middle pistol and that I played with it at some time or the other during one of our many neighborhood games of "guns".

What makes the middle pistol so unique is that it is a combination toy ... it is both a spring loaded dart pistol and a water gun (hence the dual trigger array).  The water stream is pumped out from the front top sight of the pistol while the dart would have loaded into the open barrel (even now I can still remember the sound of that dart spring being compressed ...). 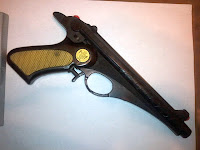 The middle pistol is damaged in many ways ... it came with no dart, it has two holes straight through it (near the medallion) which makes me think that it once was shot with a BB gun at close range and some of the filigree etching on the barrel is partially melted and smeared meaning this toy got near a source of heat at one point in its long career.

And just how long has this toy gun been around?  Well, looking at the various stamps on the pistol I find the following information:

On the left hand side of the pistol is a long gold "plaque" which reads "THE UNTOUCHABLES". 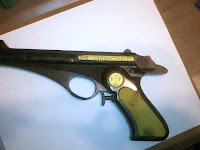 On both sides of the handgrips are a pair of medallions with some kind of Colonial or Quaker type town crier holding a banner in front of him with chains dangling on each end.

On the lower part of the left front of the pistol is perhaps the real mystery ... there is stamped script here which reads: 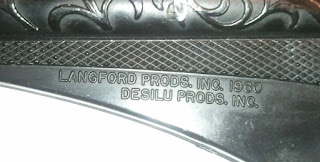 Now, if you are not familiar with DESILU Productions then let me just say that it was a company owned by the husband and wife team of ... Desi Arnaz and Lucile Ball (of the "I Love Lucy" show fame).  If anyone ever had one of these or has any information on this toy, let me know as I'm curious about its origins, "The Untouchables" name plate and this toy's relation to the DESILU Productions studio.

This pistol could be nine years older than I am!  It's when I hold an old toy like this in my hands and think about it that I wonder ... was this a birthday present or a Christmas present for some little boy?  Was it cherished?  Was it desired?  Did it give hours of play to some child in a town or neighborhood far, far away?  Each toy has its own set of stories and that's what makes toys, especially old toys, used toys, special.  This toy gun could very well be 52 years old ... and it's still neat as hell to look at and hold and think about.

As for why I purchased this lot of broken guns, it was the middle gun, the mystery gun, which really caught my eye.  The waspish shape to it was pleasing to the eye and since I was on my Leif Ericson cerebral safari (see previous post), and since I had decided to mock up some 1:1 scale examples of sidearms for that postulated universe, seeing this pistol made it a natural for a sidearm in the LE fiction that I had cobbled up.

So ... please welcome the latest addition to the kitbashing section of the work bench: the Federation WASP sidearm where WASP stands for Wide Application Service Phaser.  The name matches the design and with a little sanding, a little filing, a little filling, some greebles and some paint the WASP is going to be the standard issue service sidearm for the Federation crews in the Leif Ericson universe.

Stay tuned, this project will be coming to "Grey Stuff" soon.