I turned 45 years old in June and I was good to myself.  I bought another toy, another high tech muscle car from the 1980's, this time it was a turbo Dodge, a 1989 Daytona Shelby to be exact. 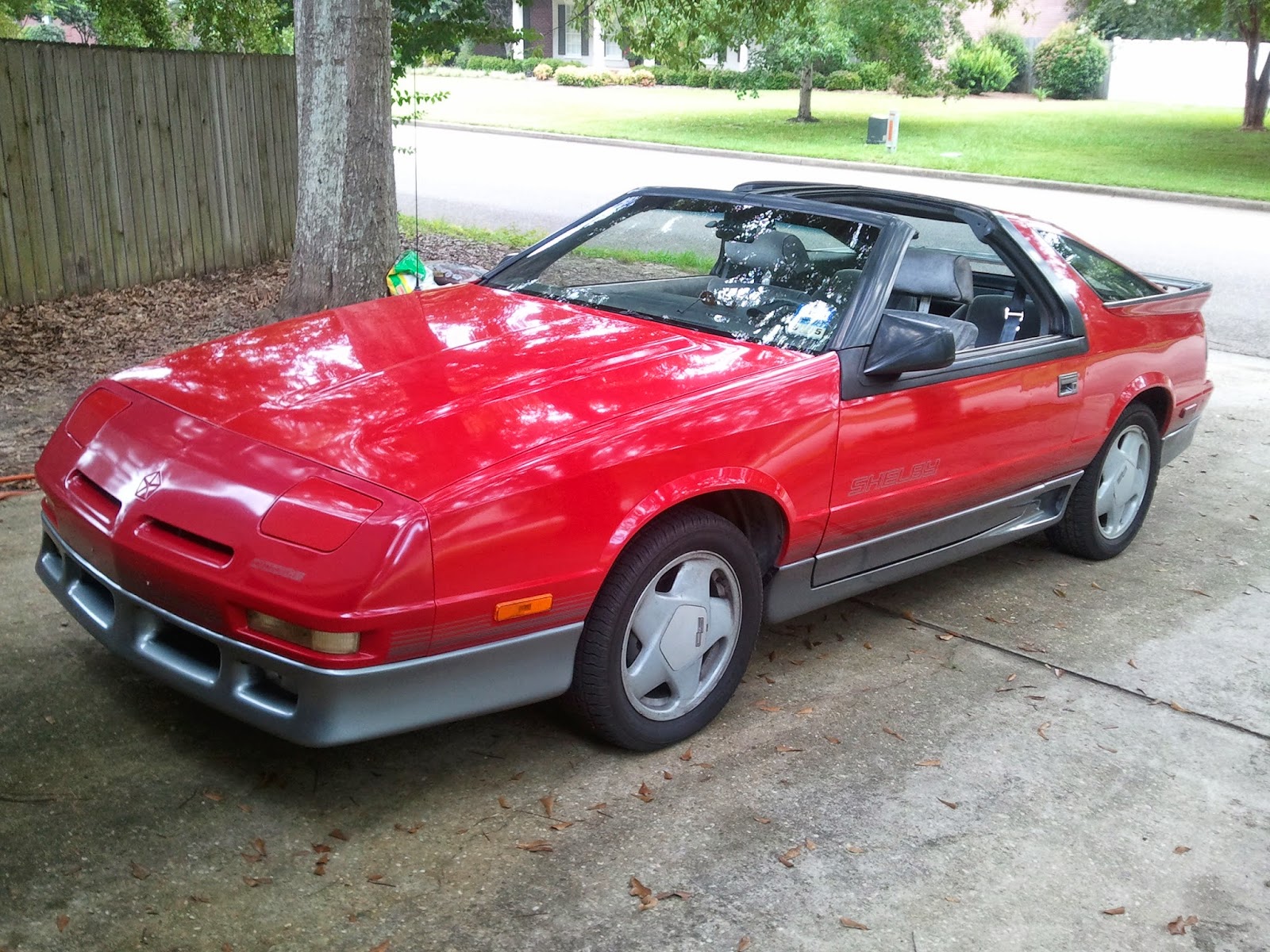 I've had a fondness for turbo Dodges since they were introduced in 1984 as the Daytona and the top of the line Daytona Turbo-Z. 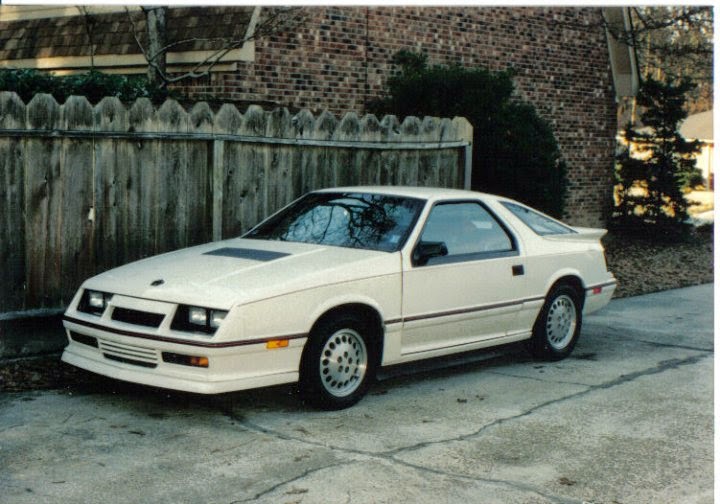 I had a 1986 Dodge Daytona Turbo Z way back in 1989 and 1990 but I sold it so I could buy a 1980 Pontiac Turbo Trans Am Pace Car.  Both the Dodge Daytona Turbo-Z and the 1980 Pontiac Turbo Pace Car are long gone but I find it was the Dodge that I missed more.  The Dodge was just a fun car to drive, sporty, sharp looking, the 2.2 liter turbocharged, fuel injected engine was a real stormer when the long skinny pedal went flat to the floor and she handled great ... a little strange since she was a front wheel drive car, but you got used to that.


That's a picture of my old 1986 Dodge Daytona Turbo-Z, circa 1989, sitting in my parents' driveway.  My only regret with the car was that it didn't have T-tops.  I'm just not a solid roof sports car kind of guy.  If part of the roof doesn't come off from the factory then I'm not going to be happy with the car.  Still, this little turbo Dodge got me through junior college with its 30 plus miles per gallon fuel economy when my '79 Trans Am with its deep 3.73 geared rear end and big 6.6 liter 403 cubic inch V8 was struggling to get the mid-teens in gas mileage while commuting.


I miss my old Dodge Daytona Turbo-Z.  I went looking for another Turbo-Z but they are few and far between today and the ones that were in the condition I wanted were just more than I wanted to pay for them.  The cheaper ones had issue after issue, sometimes stuff like holes rusted in the floor boards or old greasy / oily parts wrapped up in shop towels and sitting in the passenger seat.

I looked long and hard and finally found a one owner, 1989 Dodge Daytona Shelby in Corpus Christi, Texas.  It had 142,000 miles and some change on her, one owner, garage kept and maintained.  I paid $1800 for it, drove to Corpus Christi, Texas one Saturday, met the owner, test drove the Daytona, said I'd take it, paid him, signed the paperwork, spent the night in a motel and drove the Daytona home the next day.

I drove almost 700 miles on the return journey.

The Daytona has a 14 gallon fuel tank.

I used a tank and a half of gas on the way back and averaged about 33 miles per gallon.  This from a 25 year old 2.2 liter SOHC turbo charged, intercooled, port fuel injected inline four cylinder with a heavy duty five speed manual transmission, limited slip differential and a race ready Getrag gear set.  Oh, and the Daytona that I bought had T-tops! 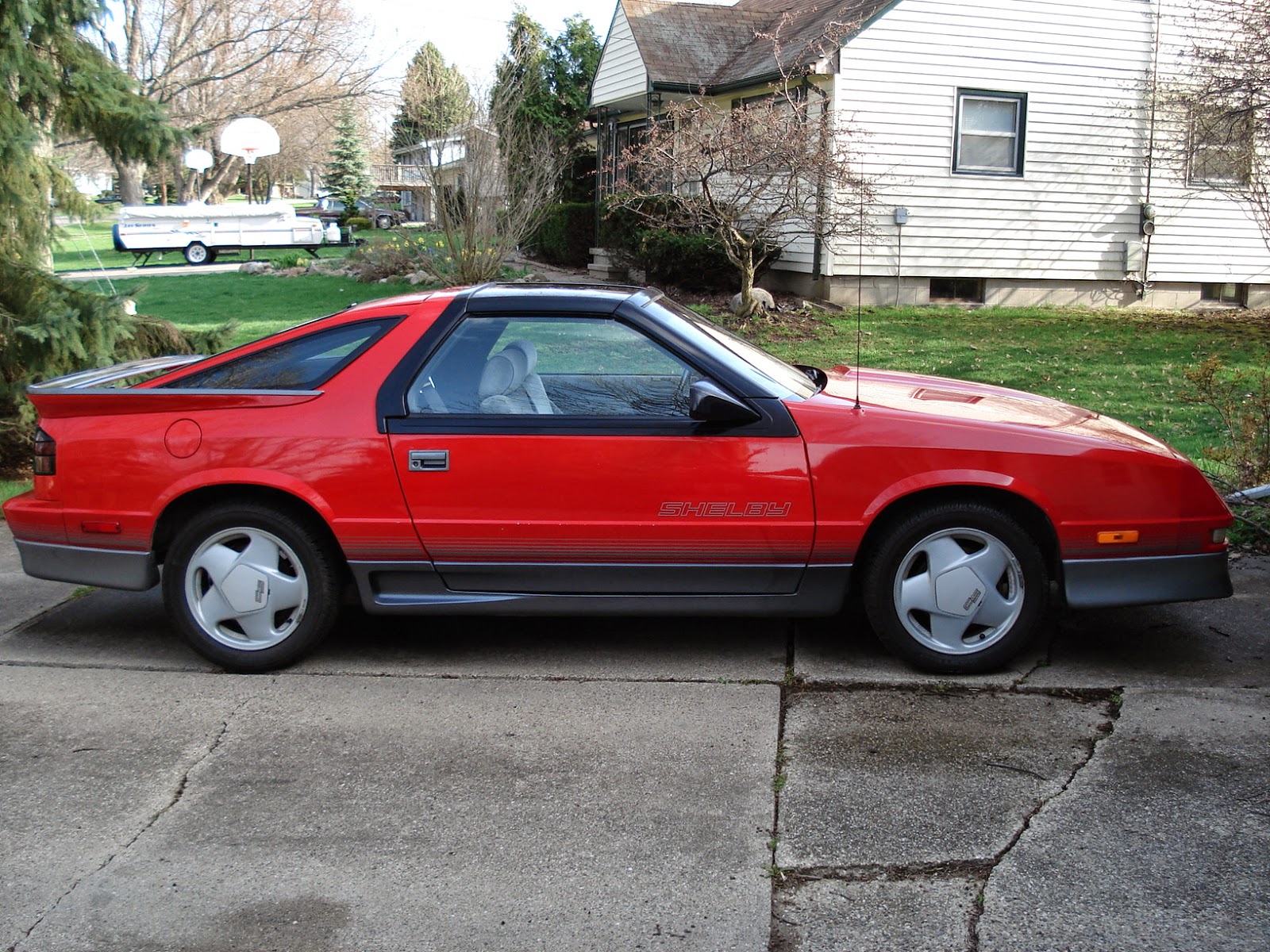 This new Daytona is nothing short of awesome.  Currently she's in the shop getting her AC converted over from Freon to 134A (my mechanic couldn't believe that I was bringing in a Freon chilled car and he doubted that he could even get a can of Freon anymore so I told him not to waste his time and just convert her to the new stuff).

Here's how mine breaks down.

Also, my interior is this kind of blue gray and according to the options, Daytona Shelbys came with three choices for interior colors ... taupe, bordeaux or charcoal so basically tan, red or black yet mine has a blue gray / silver type interior.  Since the previous owner says that he special ordered the Daytona brand new there might have been a color override making my Daytona Shelby unique and maybe 1 of 1 ever produced. 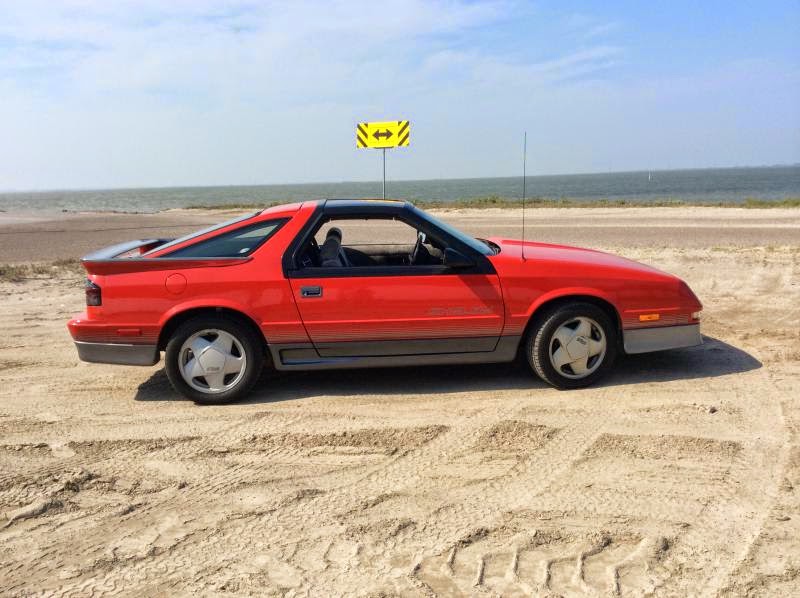 Sitting pretty on a beach in Corpus Christi (TX)

Well, okay, I've got a new toy.  Since I didn't want to hack up the '86 Trans Am in my garage I needed a new toy that I was willing to modify. 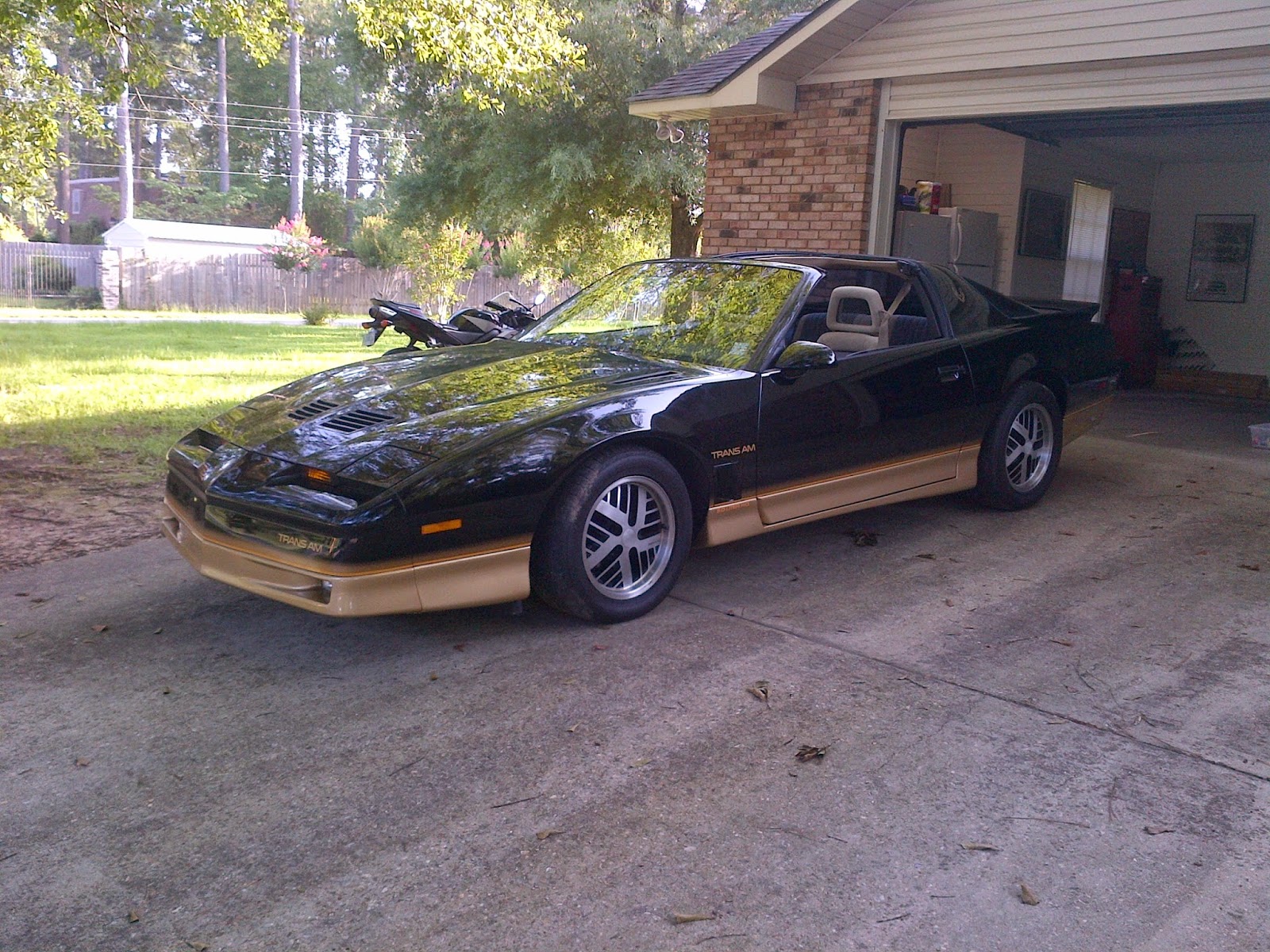 I wanted a toy that I could work on, modify, and make go faster.  The turbo Dodges caught my fancy so I decided that I wanted to learn about how to go faster in a turbo Dodge.  The goal will be to go as fast as possible while keeping everything looking stock or near stock ... no cone filters, no PVC and dryer hose homemade air intakes, no removing the air conditioning or taking the seats out ... it's got to go fast and look bone stock.  The neat thing is that if you go to YouTube you can find several Daytona Shelby's running tens in the quarter in street trim. 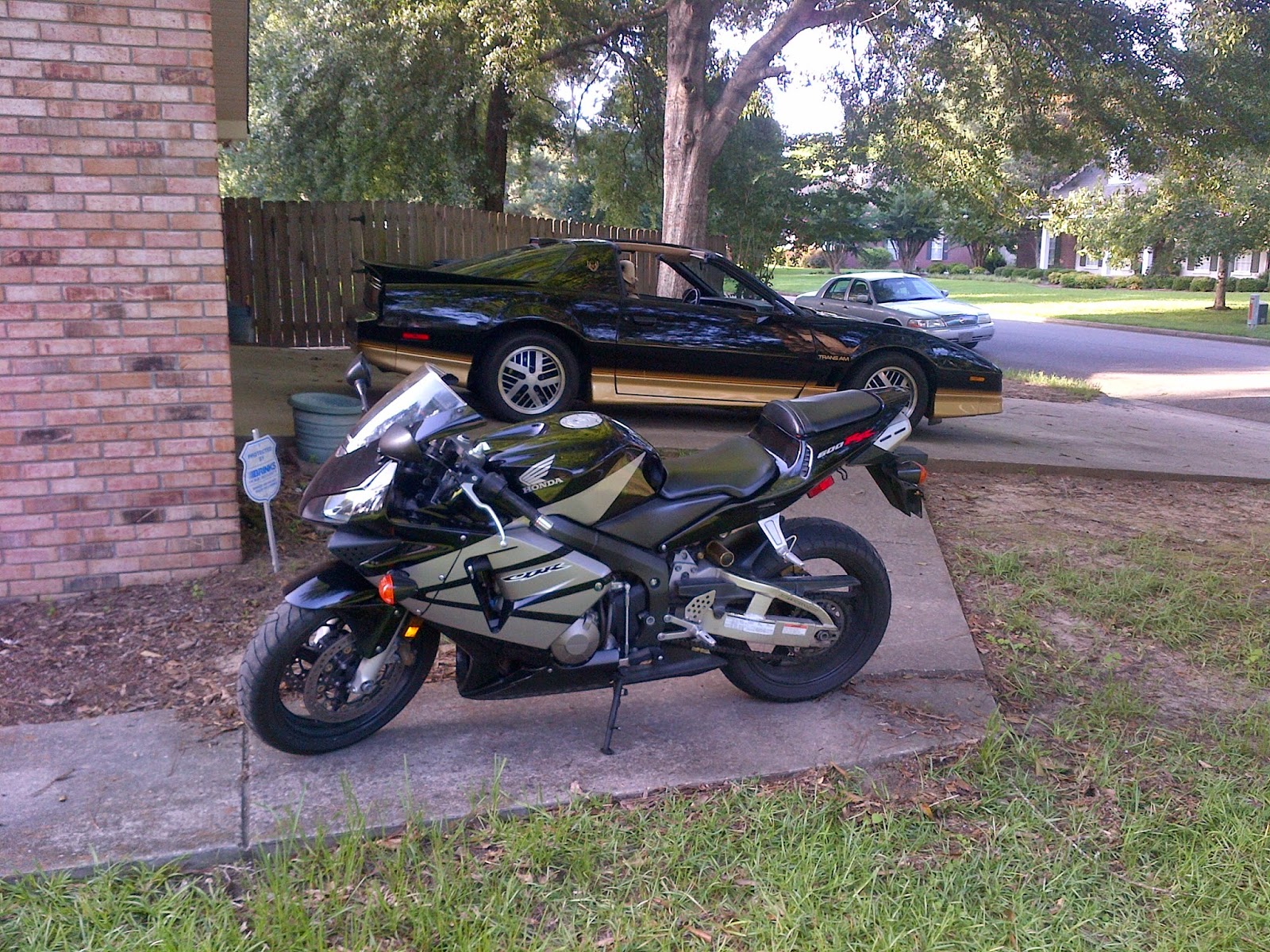 Well, enough gabbing about my new toy.  If you want to learn more, here's the link to my new blog on it; the 1989 Dodge Daytona Shelby Diary.

On a closing note ... I'm eccentric.  I like to drive cars and motorcycles that no one else has.  Life is too short to drive mediocre cars and with all the boring cars and trucks out there today it's nice to drive something that turns heads like whiplash.  My '86 TA never fails to draw attention or even a small crowd when I drive it simply because you never see one of these cars in this good of a shape anymore.

The Dodge Daytona Shelby has the same effect on people.

Just the other day I took my wife to lunch in the '89 Dodge Daytona Shelby and after we circled the restaurant looking for a parking spot we finally parked in front and the owner of the restaurant hurried out, saying that he had watched us looking for a parking spot and he HAD to know what kind of car we were driving.  He thought it was some kind of new exotic import.  When I told him it was a 1989 Dodge Daytona Shelby he was floored.  Yeah, he recognized the Daytona and remembered them from a long, long time ago but he hadn't seen one in decades and certainly not one in as good of a condition as the one that we were driving.

I told him that if he liked the Daytona he should get a look at my '86 Trans Am.

Being eccentric has its advantages.

The '86 Pontiac Firebird Trans Am and the '89 Dodge Daytona Shelby, two examples of street warriors from The Second Muscle Car Era and survivors of that decade that we called the '80's ... a decade when I was a teenager and got to live in a time when cars like the two I own were brand new, prowling the streets and some of the fastest things money could buy on four wheels.