If you want to avoid a whole hell of a lot of misery in your life then print these rules out, staple or tape them up where you can reference them and commit your social life to following them.  If you do, you'll be a lot happier.  Trust me.  Also be aware that while these rules are set in stone the use of excessive alcohol and / or illicit drugs may make these rules (in hindsight) seem flexible, especially while you are under the influence of said alcohol or illicit drugs.  Be warned!  These rules are not flexible.  If you bend them (or worse, break them) then prepare to pay the consequences that come with your decision to do so.


1.       The apple doesn’t fall far from the tree.  Remember this!  There are very few exceptions to this rule and those exceptions are very far and very few between.  If you think you’ve found the exception to this rule … you haven’t.
2.       Never make someone a priority in your life when you are little more than an option in theirs.
3.       You can’t change a person so don’t try.  What you see is what you will get, now and forever.  Don’t fool yourself into thinking otherwise.
4.       Never give anyone a second chance.  Ever.  It may hurt like hell when it happens but years from now you’ll thank yourself for having a spine, a set of balls and dodging a whole bunch of misery that was heading your way.
5.       Never date anyone who has more emotional baggage than they can carry.  Life is too short to be someone else’s emotional pack mule.
6.       You can’t save everyone so don’t try.  Chances are you'll be lucky to save yourself.
7.       Never take anyone for granted.  Never allow yourself to be taken for granted either.
8.       Avoid women who have more problems than you have.  Financially.  Emotionally.  Intellectually.  Period.
9.       Don’t go slumming.  Ever.  Financially.  Emotionally.  Intellectually.  Ever.  Period.  In other words, use yourself as a benchmark and never accept less than what you are capable of in anyone you intend to spend a good part of your life with let alone plan on spending the rest of your life with.
10.   Avoid women on the rebound.  Life is too short to be someone else’s emotional trampoline that they can jump up and down on until they feel better or until they get their life back in order and decide to move on.
11.   Avoid the immature, the emotionally stunted, the psychos, the medicated, the codependent, the needy and the clingy.  All the makeup in the world can't cover up crazy.  You have been warned.
12.   If she’s willing to leave him for you then she’ll be willing to leave you for him (or for someone else).  Don’t be surprised when this happens.  After all, if he couldn’t trust her to stay when something better came along how can you ever hope to?
13.   If she drinks or smokes more than you, move on.
14.   If she can’t let go of her ex … if she still has feelings for him, feels sorry for him, pines for him, wants to meet with him for lunch or repeatedly talks to him via phone / email / texting then move on and don’t look back.
15.   If she is divorced with kids, tread carefully.  Her kids will come before you.   If they don’t, you’re looking at the wrong kind of woman.  Multiple kids by different men (especially if they were married at the time that they had them) should be your immediate cue to avoid saying anything deeper than “Hi.”.
16.   If she’s materialistic or focuses only on one aspect of your life (your guitar playing, your car, your motorcycle, etc.) … move on.  Fast.
17.   No woman is worth your tears and the woman who is won't make you cry.
18.   If she says any of the following then leave skid marks from your shoes on the pavement when getting away: “I’m not like all the others.”, “I won’t hurt you.” or “I won’t lie to you / cheat on you / leave you.”
19.   Don’t waste time playing silly or stupid games.  Life is too short to play silly or stupid games.  If she wants to play silly or stupid games then let her … with herself and by herself.
20.   If she suddenly walks out on you and what you both have for no really good reason then just remember; she’s someone else’s misery now.  Get on with your life and forget her.


“There comes a point in your life when you realize who matters and who never did, who won't anymore and who always will.  So, don't worry about people from your past because there's a really good reason why they didn't make it to your future.” - Unknown 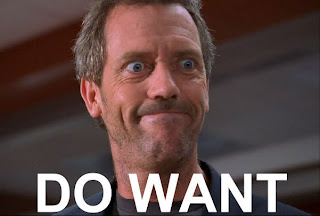 Well, after finally adding NECA's BORDERLANDS "Claptrap" to my collection (it resides on my desk, next to my nameplate, holding up on of my business cards in its pincer hands) and after almost finishing my "Terminator" and "Terminator 2" action figure lineup (all Arnold figures in various states of damage and decay up to (or is that down to) and including the Endoskeleton) I've decided to clear some more space on my shelf for a new wave of somewhat pricey action figure goodness ... namely NECA's "ALIENS: Colonial Marines" series of toys.

I've waited for these figures for a very long time, I even wrote NECA an email years ago requesting that they do these figures.  I can't say that they listened to me, I'm not that naive as they probably got thousands of emails requesting ALIENS figures, but irregardless (which I'm told isn't even a real word) the figures are finally here ... or almost here. 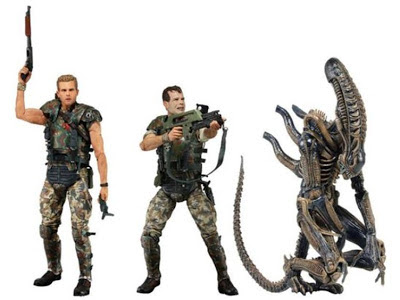 The first wave is going to include Hicks, Hudson ("Game over, man!") and a reworked ALIEN.  Hopefully additional waves will include the other characters.

I think that Armyghy from the Gearboxsoftware forums said it best "With the sheer number of Predators Neca does, I wouldn't be surprised if we saw the entire squad done. Drake, Vasquez, Gorman, Farro and Spunkmeyer would need original treatment, but the majority of the marines would only need head swaps and color differences. And I would buy every last god damn one of them."

If NECA ever produces a to-scale Power Loader and / or ALIEN Queen ... well, I've still got two kidneys, you can get by in life with only one and I hear there's a good market for things like that for people who need them.

Email ThisBlogThis!Share to TwitterShare to FacebookShare to Pinterest
Labels: Do want, toys

The limits of technology

Snapped this the other day ... off the "Laugh USA" channel on XM.  Thanks to the limit of the character display, it made it even funnier. 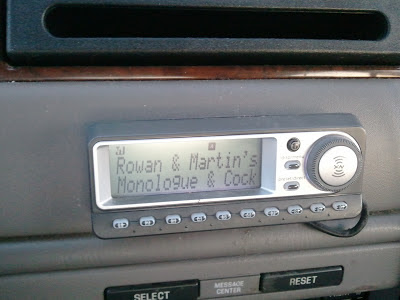 So I was back on my audio-video detail running siamese coax cable yesterday at one of my scales office (a very old building full of spiders and other not-fun-multi-armed-things) and amid old spiderwebs and dirt-dobber nests I see something … familiar.

I lean closer and there, stuck in an old, torn open spider’s egg sack is something which I can’t identify but which looks totally like … the “Ffffffuuuuu” meme face!  I took the best picture I could because whatever it is that's making the "Fffffffuuuuu" face is pretty small and would fit on the nail of your little finger.  Still, while I was running cable through the ceiling I kept saying “Ffffffuuuu” in my head over and over again and I kept turning every now and then to see that weird little face hanging there in the old torn open egg sack stuck on the awning beside where I stood on the 8 foot tall ladder. 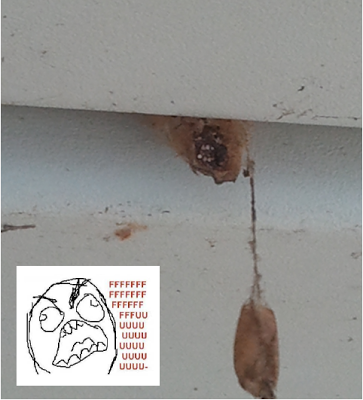 The wall in my office at work and the Pontiac shrine built there ... 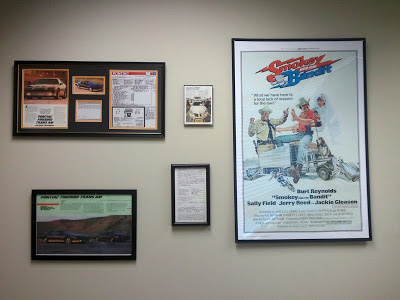 The big rectangular frame is a custom framed Pontiac ad from 1985 showing a black and gold TA in the same paint scheme and options as my '86 along with a copy of the RPO callout (75 RPO codes!), a dealer postcard from the same year showing a black / gold '85 TA at speed on the highway and a copy of the original window sticker.

The small picture at the top is supposedly of the last US Pontiac built (a plain vanilla Grand Am destined for a rental fleet).

The large framed picture is a two page spread from the 1985 Pontiac full-line catalog again showing the black and gold TA.

Of course there's a 24" by 36" framed "Smokey and the Bandit" movie poster (saw that in the theater when I was 7, along with "Star Wars") and finally the small frame in the middle is my first speeding ticket from 1986 when I was 16 years old. Definitely a keepsake and maybe a rite of passage. 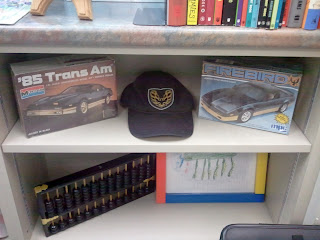 On the shelf behind my desk I have an old TA cap along with a pair of 1:32 scale models, unopened, still shrink-wrapped in the original boxes.  The one on the left is a black and gold 1985 Pontiac Trans Am by Monogram and the one on the right is a 1985 Pontiac Firebird (Trans Am) by MPC.  What's interesting to note about the two kits is that the Monogram kit features a TPI V8 with a manual transmission ... a power train that wasn't available until 1987 due to emissions standards.  The MPC version features a Crossfire Injection V8, a EFI motor that disappeared from the lineup over a year before the new bodystyle was presented.

Posted by Christopher T. Shields at 12:34 AM