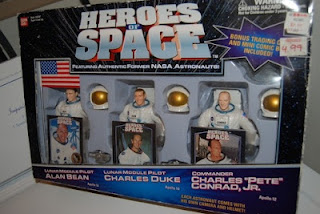 Patience is one of the most important tools you can ever have at your disposal in life but especially when you're after something on Ebay and after several months my Ebay search netted me a reasonably priced copy of Bandai's "Heroes of Space" (featuring authentic former NASA astronauts).  The price tags on the box are for KB Toys ($17.99 scratched out and $9.99 written in), below that is a Toy Works price of $4.99 and on the left side of the box is yet another price sticker from Savers, showing a date of 2/23/11 and a price of $3.99.

I paid $19.99 for it on Ebay.  Seems a bit much since this toy has evidently bounced around a  few resellers in the last two decades and hit almost rock bottom for its price but consider that $19.99 is probably a little less than what this toy cost brand new, it is still in the box complete, and I have it in my studio now so ... the price is right.

The copyright on this toy is apparently 1990 so it's over two decades old (and part of the renewed interest in the 20th anniversary of the Moon Landing back then).  I vaguely remember seeing this toy when it was new (I think it was offered in the local Books A Million store) but I had no interest in it then.  My interest now is purely art, I have a thing for astronauts and the space program, part of my interest in macabre art.  Anyway, I've seen this set going for nearly $100 on Ebay so getting it for a fifth of that price is a bargain.  I'd already picked up the Alan Bean figure a few weeks back, sans helmet, and turned him into "Palinurus" (aka "Skully") which was supposed to be the dead astronaut mascot for my art studio "Spontaneous Necessities" ... 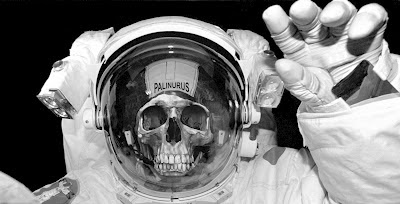 Here's a quicky of "Skully" ... the oversized skull gives him a SuperDeformed kind of caricature look that I'm not sure I'm happy with or not.  In a few months when the Halloween super stores start to reopen and the local craft stores stock skeletons and skulls and other good stuff I'll take Alan Bean with me and fit him for something more his size.  As it is, the pack of skulls that I have seem to be about 1:6 scale or the size of a 12" action figure. 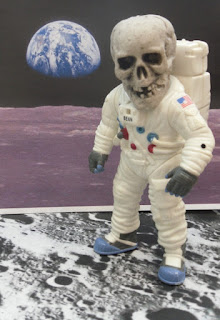 In hindsight, maybe he shouldn't have taken his helmet off on the Moon ... that tends to ruin your complexion.

The goal of this project was to produce a "dead" astronaut toy that was somewhat realistic.  It became more of a superdeformed mascot but I think I'm going to steer the project back to the original goal.  The three astronauts are going to get skulled and detailed while the loose figure will probably get more of the mascot treatment.

Posted by Christopher T. Shields at 11:23 AM