Back in the late 1970's when STAR WARS first came out, a lot of toymakers were caught by surprise ... George Lucas had not only created a supernova in the science fiction film genre but he created a bottomless pit (full of money) in the space toy genre.


Like I've said before, my early years were spent playing with Hasbro's Action Team 12" G.I. Joe and "green army men" mostly from companies like Processed Plastics and Marx.  When STAR WARS appeared on the scene, I quickly transitioned from G.I. Joe and army men to Kenner's STAR WARS action figures.  Oh, I remember the "Early Bird" set (mail order for Luke, Leia, R2D2 and Chewbacca) and waiting for the figures to hit the stores locally.  Then I remember spending the next year and a half trying to find the three hardest figures of the first twelve to ever get; Sand People, Death Squad Commander (why would you name a child's toy that?!) and the Jawa.

Well, George Lucas showed everyone that science fiction could not only sell at the box office but it could sell at the toy department as well.  Lo and behold, Processed Plastics, one of my old friends and childhood toy provider, noticed this fact and produced a line of "space" themed army men under the "Laser Team" and "Star Patrol" name lines.  The figures were pretty cool, for space army men, and you had your stereotypes as set by STAR WARS a year or so before. 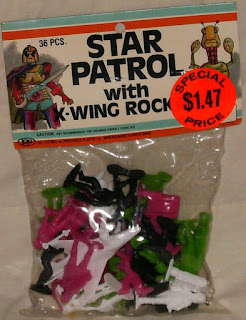 STAR PATROL (with X-Wing Rocket) - a bag of fun and good times
from Processed Plastic Company, Montgomery Illinois.
At $1.47, it was a bargain to any child.

So, the Star Patrol figures included a Han Solo type character (complete with space helmet and poised ray gun), a Chewbacca type character (big hairy alien with a big laser rifle), a Darth Vader type character (ominous death knight type with raised energy sword / lightsaber), Princess Leia type (skirted space chick in high boots standing next to a computer console), R2D2 type (a square, thin robot on two legs), a space monster (a cross between a turtle and a lobster and I swear I'd seen it before in some kind of '50's campy movie), and finally two Apollo era astronauts looking way out of place with the rest of the figures. 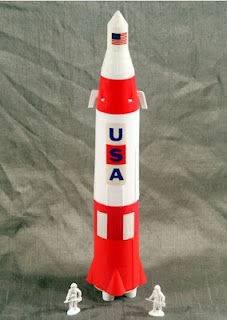 The Apollo astronauts were simply blown up examples of the two astronauts that came with one of Processed Plastic Company's other space toys - the three stage Apollo rocket with blast off capsule (I had probably 3 of those growing up).

One of the more interesting rip-offs of this offering was the "X-Wing Rocket" - a blatant rip-off of the X-Wing fighter from STAR WARS.  But what is an "X-WING ROCKET"?  Well, to put it bluntly, it's an F-16 with an extra pair of wings and all four wings are raised / lowered into an "X" pattern.  Processed Plastic had previously issued a large scale (1:48?) plastic toy of a F-16 jet fighter, complete with opening cockpit (the whole top of the front of the jet actually opened) and detailed pilot (I was and still am a big fan of cockpits, pilots and control systems in toys and models ... I hated toy planes and models of planes that didn't come with detailed cockpits or pilots so even at a young age I was kind of a toy snob / connoisseur with high standards for what I would play with or what I would spend my childhood time letting entertain me). 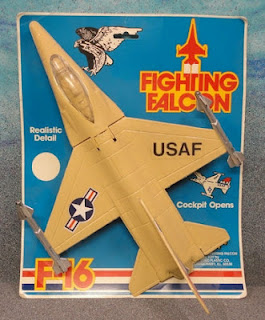 Processed Plastic Company F16 ... you'll note the two, count them, two Vulcan cannon gun ports, one to each side whereas the real F16 only has one ...

Well, not really wanting to tool up another toy design when they had a perfectly good futuristic looking shape to begin with (and the F16 is called the "Viper" by its pilots, a homage to the three engined Colonial space fighter seen in Battlestar Galactica (the old series, the good series) so the guys at Processed Plastic Company took their F16 Fighting Falcon  toy, added a pair of wings (four total), shifted those wings to an X-configuration, renamed it to be an "X-WING ROCKET" and ta-dah!  Instant shelf filler geared towards the kid who just couldn't get enough space toys in their life. 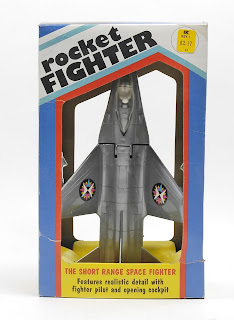 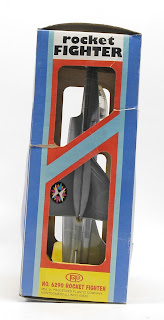 Here's a prime example of this toy, still in the (slightly shelf worn)  box, still with the K-Mart "gold key" sticker on it.  I recently picked it up on Ebay for $7.99 (and about double that for shipping and fondling).  Now it rests in my study as another reminder of one of the greatest childhoods that any kid ever had. 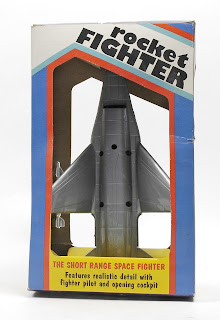 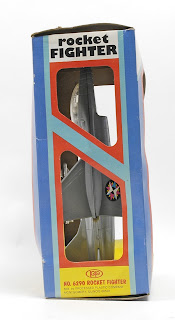 I remember these toys, as a child, being brand new on the toy shelves of stores like Woolco (RIP), K-MART (almost RIP) and others.  This was a large size, say 1:48 scale toy of the much smaller toy included in the LASER TEAM and STAR PATROL figure bags.  A lot of people didn't know about this toy but if you're a fan of the LT or SP toys and you thought that the little rocket plane that came with it was unique, I'm here to tell you that Processed Plastic made a much, much larger toy of it ... complete with opening cockpit and detailed pilot (so it passed my standards of entertainment for a toy plane).

But I never owned one of these ... by the time that Processed Plastic was filling the shelves with these toys I had moved on to other interests ... like fast cars, girls and heavy metal music.  Still, it's an interesting artifact from the supernova that STAR WARS ignited ... the X-WING ROCKET, also sold in a larger scale as the "Rocket Fighter" - the short range space fighter.  It mounted two Vulcan cannon ports and four big, fat Sidewinder missiles (which were removable for play).  I have two of these now, this boxed one and a loose one that is red and white with play scuffs, missing decals and faded chrome on the missiles.  When people visit my study, it's one of the first things that they see and they invariably have to hear the story behind this toy that they've never heard of.

If you're a fan of the old Processed Plastic "STAR PATROL" or "LASER TEAM" figures, there's great news!  A company has acquired the molds for these toys and is both reproducing them and selling them again!  Amazon.com has the goods and here is the link as well as a picture.  Go get a bag of them and decorate your desk at work ... it's sure to invite comment and discussion from others who knew these toys and remembered them well. 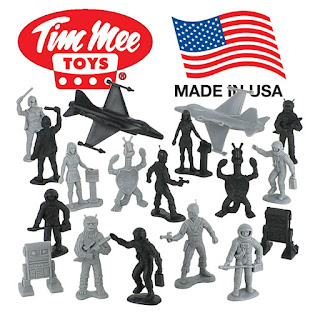