Like I said in my previous post, I'm going to use this blog to talk about things that matter (or mattered) to me. I've got several series of posts lined up in the old thought cache but one I've been meaning to kick off for a while now is a look back at the toys I remember the most from my misspent youth. I thought I'd post a new series ... Childhood Revisited or things that I remember from a long time ago that once made me smile. So much has changed since my childhood and not necessarily for the better. However, ignoring that, I'm going to look back on several instances of my childhood ... mostly toys that I had or wanted (but never got) and share my memories and thoughts on those items.

For those who might be wondering, I had a happy childhood. No, scratch that, I had one hell of an effing great childhood and here's a glimpse into it. 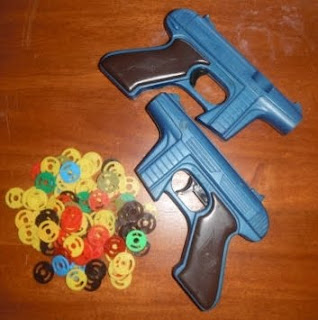 One of the best memories of my young childhood was playing a game that we simply called “guns.” The battlefield was the whole suburban neighborhood … every yard, half-built new house, vacant lot and wooded lot … and we’d play for hours at a time. Liberals and other peace nits are going to send me hate mail now. Yes, I grew up playing with toy guns, pretending to “kill” my friends and … surprise! I’ve never shot or killed anyone in real life, I’ve never robbed a liquor store with a toy gun and I don’t have the urge to wail and cry my heart out over a tree that’s just been cut down so I believe that I grew up (reasonably) normal.

Chiggers, grass stains, dirty clothes, sweat, the occasional broken toy, the occasional scraped knee or skinned elbow, a bruise or two and maybe a few salty tears were all childhood occupational hazards and just part of the price that we willingly paid to wage war on each other and have hours of fun and friendship.

Now, when it came time to play guns one of my favorite weapons of choice was the Tracer Gun series of toy gun from Rayline (Ray Plastics) of Winchendon Springs, MA. I’m not sure of the whole history of this toy weapon series but I do know that it was offered in both pistol and rifle form, in several colors (each) and that it was sold as both a Star Trek (the original television series) tie-in as well as a stand-alone product.

I never had any of the Star Trek licensed editions of the Tracer Guns (and these guns never appeared in the original television series). Except for maybe some basic coloration changes the Star Trek edition Tracer Guns seemed to be identical to the non-Star Trek licensed editions.
I personally remember having both a blue and a gold edition of the pistol (both black grips) and a white with blue grips edition of the rifle which I think I got as a birthday present in ’77 or ‘78.
This toy gun, in either pistol or rifle format, was simply … awesome … and whoever designed this particular toy gun series deserves a multitude of thanks from an entire generation of kids who were lucky enough to grow up playing with these wonderful toys.

The Tracer Gun was a simple though novel idea, load a toy gun with twenty flat aerodynamic plastic discs, squeeze the trigger and a spring loaded flicker arm (kind of like a clay pigeon thrower) would be pulled back to a certain point and then released with a violence all of its own. This flicker arm would be flung forward striking the first plastic aerodynamic disc off the top of the spring loaded 20 disc magazine. When the spring arm made contact with the aerodynamic disc, it would send it spinning down the flat tracks inside the round barrel. The aerodynamic disc was basically an air foil and would leave the barrel like a Frisbee, buzzing towards your intended target and floating through the air at a speed that was, generally, a little faster than any but the fastest kids could outrun or dodge. Fat kids went down without a hitch and you didn’t have to lead them as much as you did the quicker, more agile skinny kids.

With 20 or so discs per load, you could afford to be … liberal … in firing at your target but you had to be careful outside because attrition among discs was high if you didn’t stop to pick up the discs that you just fired and generally, as a rule, you often went home a few discs shy of what you brought with you but that was okay. I’m pretty sure that losing discs was part of the design of this toy gun because the company used to sell boxes of spare discs as well. Remember, kids; product attrition due to customer use is tantamount to corporate profit.

I remember the trigger was a little hard to pull but you never forgot the sound that this toy made when it fired … a solid plastic click, distinct and easily recognized by anyone who ever had one of these toys. The fling arm snapped forward with such force that you felt sure that if you could somehow get your finger into the chamber and pull the trigger that it would pinch you good.

The tracer gun wasn’t very accurate under rapid fire due to the short barrel (the slotted barrel was only an inch, maybe two inches long) and because the simple act of pulling the trigger often amounted to a very real case of “Buck Fever” resulting in a wide cone of fire. As for being harmful, you could hardly feel the discs if they actually did hit you but you definitely saw them coming … at least if you were being shot at from the front.

You could dual wield the pistol (I had two) but the excessive trigger pull worked hard to make the off-hand pistol even more inaccurate. Dual wielding a set of Tracer Gun pistols really saturated the air around your target with discs but trying to pick up forty colored discs after emptying both magazines took a real chunk out of the fun factor … especially when knew that you had fired forty jet discs, you counted up your discs and you could only find thirty-six. Like I said, it was a really good thing that the company sold extra packs of jet discs.

The rifle version, strangely called a “Jet Disc Tracer Scope” or something like that, had an advantage over the pistol version in that it had a larger magazine (though it still only held the same number of discs as the pistol, IIRC) and the size of the magazine lent the magazine itself to be used as a handy foregrip / handgrip for the rifle thus adding to the stability, the accuracy and the ability to fire faster. The trigger pull was just as harsh as the pistol version (and just as loud) but using the rifle’s magazine as a handgrip, you could really squeeze out some volleys with the rifle, literally filling the air with flying jet discs. The large see-through thread spool sized scope on top was there only for decoration and served very little, if any function thus the name of the toy rifle was somewhat misleading.

All in all, the Rayline Tracer Guns are toys that have many cherished memories from my childhood and I long for those carefree days of my youth when the summer lasted three full months and seemed just as endless as the imaginary suburban battlefield.
And to close on a bit of weirdness ... I found this picture one night on one of the artsy sites that I frequent. Look at the little boy in the foreground ... yep, he's walking the streets of New York City with a Rayline Jet Disc Tracer Scope rifle. 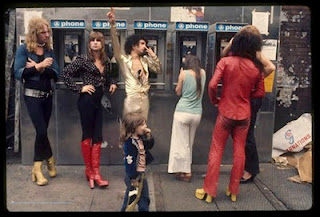