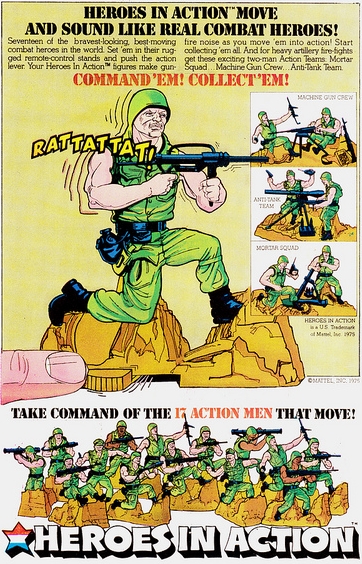 Sometime in 1974 I was introduced to Mattel's "Heroes in Action" line of (somewhat) poseable toy soldiers and toys.  I was 5 years old at the time and Military toys, as one might expect, were kind of on the down side at that time since the (unpopular) Vietnam War was still going on.  Even Hasbro's "G. I. Joe" had started to show some pacifism by dropping his mean green attitude and adopting the motif of "Adventure Team" whereas Joe took up adventuring and tomb raiding rather than mercenary employment and clandestine wetwork.  I'd been playing with Marx toy soldiers and any of a half-dozen types and brands of "green army men" when I saw these toys for sale and it was love at first sight ... that big action display showing the figures, the demonstrator figure on its stand where you could move the tab on the base and here the "click-click-click" which, with a little bit of imagination sounded just like small arms fire.

Maybe it sounded like some cheap Halloween noise maker but moving that lever made the figure move, if only his torso and the figure would swing his torso from left to right and back again, spraying the enemy (whoever that was) with machinegun fire.

To say that, at the time, these guys were cooler than penguin nuts is an understatement and I eventually had a bucket full of them.  They were my first introduction to small action figures that not only could be posed but which also came with accessories and weapons that could be swapped between figures.  The Mattel "Heroes in Action" henceforth abbreviated simply as "HIA" in this post, were my first introduction my love affair of what would later evolve with the Kenner "Star Wars" action figures.  Mattel's "HIA" were so cool that they didn't even need an enemy ... you could just fight ... whatever ... with them and they would kick so much ass that no trace of the enemy remained.

The bases were always my favorite parts of the toy since they were so detailed ... we're talking Geoff Darrow detailed ... splintered wood, rubble, debris, strewn ammunition belts, broken open wood boxes with handgrenades spilling out ... detail.

The "HIA" were an interesting lot ... there were basically four upper torsos and three lower sets of legs (standing, squatting and sitting).  By rearranging the torsos with the legs, Mattel presented us with 12 different initial variations of figures including an officer with a soft cover ("cap" to you non-jarheads).  At first the "HIA" seemed to be intended for World War II but one quick look at the weapons showed that these were Vietnam era combatants.  Weapons included grenades (which slid onto the figure's hand), M60s, M3 "Grease Gun" SMGs, .45 Colt automatic pistols, bazookas, and flame throwers (complete with backpack fuel tanks!).  One of the weirder offerings was a soldier with a removable gas mask (that was hella cool!) who had a M60 with a rifle grenade on the end of it.

Even at that early age I understood that you couldn't shoot a rifle grenade off the end of a M60 machinegun! 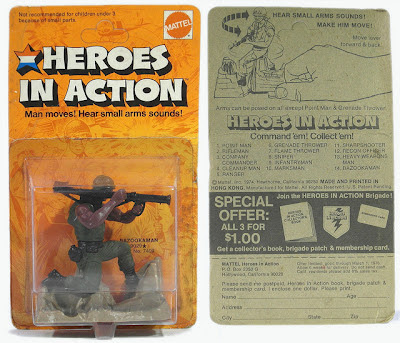 The figures were sold individually, each variation came in a simple carded blister pack with accessories like a single weapon.  The officer came with a .45 Colt automatic pistol and a walkie-talkie.  The grenade guy came with a grenade and a M3 "Grease Gun".  Most of the expressions of the figures were their "war face" ... either that or they were terribly constipated from the K-rations.  There were mostly white guys (or really tanned guys) and a few black guys.

Larger offerings included three playsets - each with two figures included on a much larger, dual clicker base with accessories.  These were represented by the heavy machine gun crew (one guy sitting and firing a tripod mounted .50 HMG while the other threw grenades and gave covering fire with his M3 "Grease Gun" or M60), the Mortar Team (again two guys manning a crew served weapon) and the Anti-Tank Gun Team (two HIA with a Recoilless Rifle).  I had all three of those playsets and one other ... the "missile artillery" which was a trailer mounted missile (replete with classic 1970's white and black checkered stripe color scheme) that you could launch about five to eight feet across the room.  There was also a Jeep that I never had, a howitzer that I never had and a really heavily gunned helicopter gunship that I remember buying at Wilson's in Jackson, MS (Wilson's would later become Service Merchandise).  The helicopter had a number of unique features ... spinning main and counter rotor, a place for a figure to stand in the back and be a door gunner, wing mounted air to ground missiles, a rocket pod, two .50 heavy machine guns, a gatling gun and a weird laser cannon with antenna ... because I distinctly remember US Air Cav gunships, namely the Hueys, having laser cannons during the Vietnam War.  I think there was a winch as well but I can't be sure as time has made that memory fuzzy.  I played the hell out of that copter with my "HIA" figures ... I had a sandbox and I crashed that copter and half buried it and had my "HIA" figures do rescue attempts and recovery operations.  I played with it until the decals started to peel off and the parts vanished one by one. 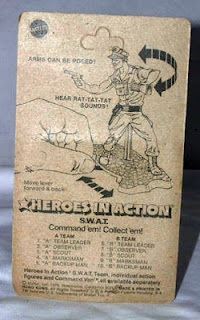 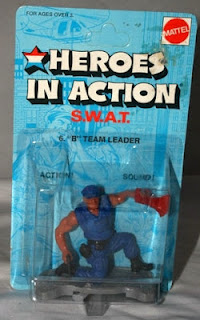 Sometime in 1976 ... Mattel took the olive drab "HIA" and colored their uniforms an urban semi-police blue and reissued the "HIA" as "SWAT" ... possibly because at that time there was a police / crime drama show on TV named "SWAT" that was really, really popular and had that catchy theme song that was a number one hit for the group "Rhythm Heritage" and was playing about every fifth song on the radio back then ...  Unfortunately the "SWAT" version of the "HIA" didn't really hit it off and the toy line folded shortly thereafter, especially in the blistering arrival of "Star Wars" on the big screen.

For what it was worth and while it lasted it was a grand time to be a kid and Mattel made it wonderful.

Shortly after Mattel's "HIA" entered my life another small line of action figures entered my playtime as well ... Fisher Price's "Adventure People."  The scale was close enough to warrant interaction between the two toy lines but like I began this post with ... talking about the Fisher Price "Adventure People" is going to have to wait for another time.
Posted by Christopher T. Shields at 12:15 AM

Mystery toy guns of my youth ...

I'm once again asking for help.  Does anyone remember a pair of toy guns from the early to mid 1970's?  The last time I saw them for sale was sometime in the mid 1970's, say 1975, and I want to say that Mattel produced them.

They were very well built toys, on the high end in price.

The first toy gun I remember was a pistol gripped full size carbine that fired plastic stripper caps fed single file into a removable magazine in the pistol grip.  The stock was pseudo-wood, more like dense pressed fake-wood that they used on car dashes on old Chevy Impalas.  It was a big gun, full size, adult and a childhood friend had one but the stock kept coming off (mainly because it was held on with one long screw which had become lost ...).  It looked almost Olympic in its design, it was metal and plastic and fake-wood and it weighed and cost almost as much as a decent Daisy BB gun at that time.  I've searched for years on Ebay just to see this toy again and maybe find one cheap enough to own but alas ...

The other toy gun was called "The Black Widow" and I think that Mattel made it as well.  It was a unique looking, wicked black revolver, more waspish than widow.  It had a long barrel, a metal cylinder and it took those 8 shot plastic ring caps that were easier to load than the paper caps but which were such a total step bitch to pry off once you had fired the entire bunch and the cap blasts had melted or distorted the cheap plastic.

I miss the smell of a good, lengthy cap gun fight ... the smoke, the odor wafting on the wind.  Precious childhood memories, filtered through the rays of light of a fast fading year in the cool fall.

Both toy guns were sold and packaged as being the equipment used by urban spec-ops / SWAT teams.  I'm pretty sure these guns came out the same time that Mattel painted their "Heroes In Action"  figures blue and reissued them as "SWAT".  Heroes In Action ... that's another post in the old neural queue soon to come your way.

Well, if else anyone remembers these two toy guns or you have more info on them, drop me a line.

Update - January 28, 2014 - Mystery solved ... I found the carbine in an old J.C. Penny Christmas catalog from 1976.  This item is listed as a "Crackfire Carbine" in one place and as a "Police Task Unit Carbine" under the picture. 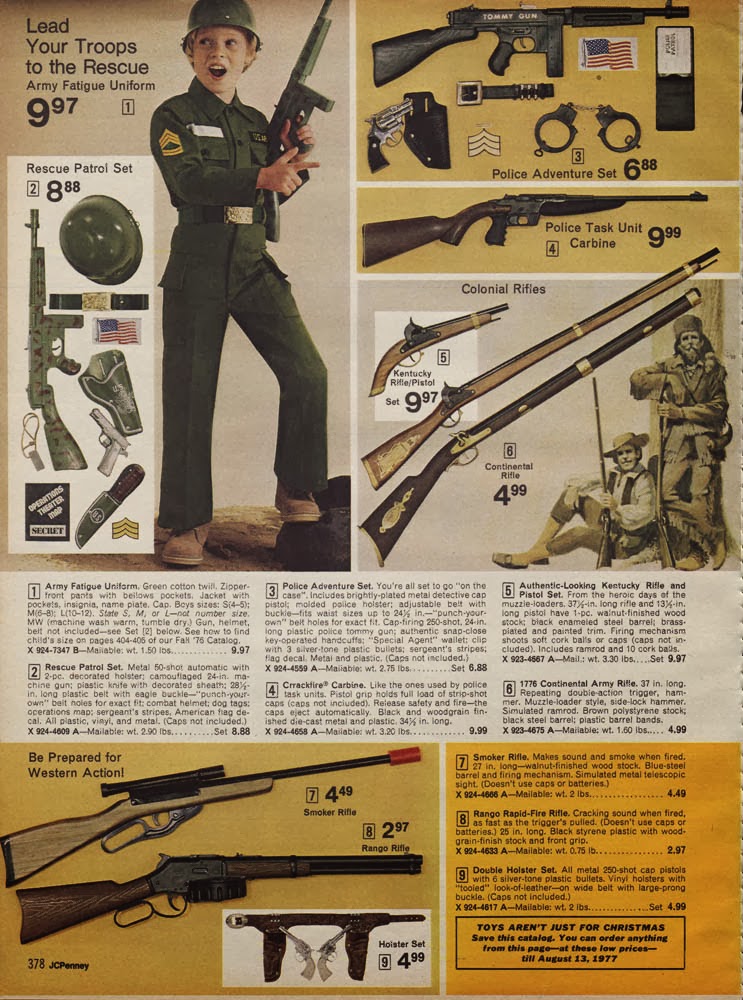 I'd be lying to you if I told you that, as a 6 year old and a first grader, way back in 1976, I didn't daydream about getting that army play uniform and military gun playset though I didn't like the camo scheme on the Tommy Gun.

Even a year later, as a 7 year old second grader, even being big for my age, this gun was hard to hold and play "guns" with.  It was heavy, too ... big, long and heavy so it wasn't a favorite.  I remember the dark colored packaging of the rifle and I want to say that my falliable childhood memory put this as being marketed as part of the Mattel "Heroes in Action" SWAT offerings.

And a few minutes after I found the mystery carbine I also lucked up on the Black Widow pistol ... it was offered by Mattel, part of the "Crackfire" series and listed as a SWAT offering. 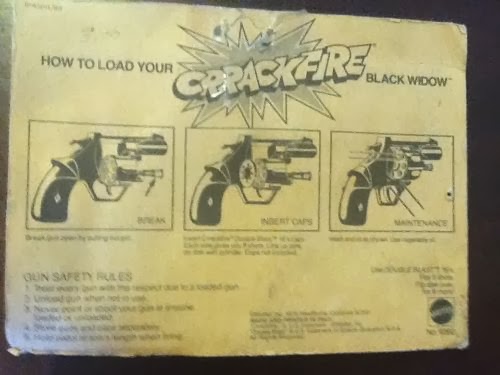 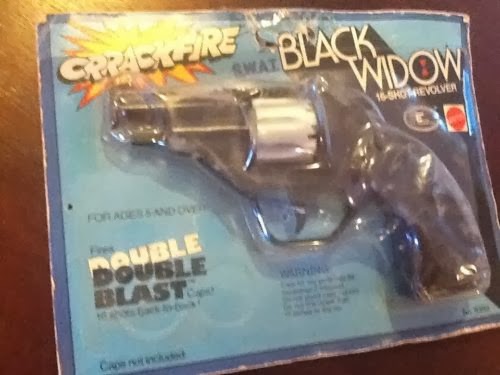 Thank you, Internet, for helping me find the mystery toys of my youth though sometimes my memories are a bit fuzzy ... like the fact that I remembered this revolver had a larger frame / longer barrel but it seems remarkably like a lot of other similar cap revolvers of the time.  Strange ...