Apparently my '98 Lincoln became possessed today at work.  A few days ago I had a problem with the power door locks and trunk release, figured it was a fuse, found the fuse (it was blown), put a new fuse in and promptly blew that fuse as well so it's a short somewhere that I've got to track down.  Lately the car has been missing some, not enough to trigger a SES light on the dash just enough to buck and shake at low speeds ... almost like it's grumbling.

All in moderation ... until today when I left work early this morning for Lucedale (at the state line) to install some security cameras and DVRs.  I hadn't gotten very far when I started to receive phone calls and emails and text messages that my Lincoln's horn was blowing ... not intermittently like when the car alarm goes off but just blowing all the time.  The car was locked, parked, not running and no one was around it.  Of course the only set of keys to the car were with me, east bound and down for the state line so all anyone at the office could do was stand around and stare at my demon inflicted Lincoln and wring their hands.  After causing much aggravation and annoying just about everyone at the office Jason Bolstad's brand new Kia Soul, parked next to my Lincoln, decided to join my car with his car alarm forming an even more annoying duet.  I'm told that my Lincoln's serenade of the other cars and trucks got a few other sympathetic horns to blowing as well.

And then it just stopped.

And it never did it again the rest of the day.


The heat might have had something to do with it but I think it's a sign of the end times. 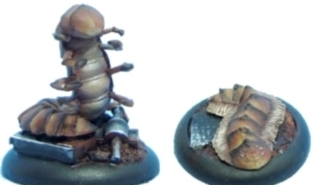 On a much more happy note, I got in my pair of Taban Miniatures "Mutant Critters" in the mail today.  Mutant Critters : each pack contains one necrovorous and one burrowing worm. ... two 32mm pewter miniatures (22mm tall for the larva and 25 long for the centipede) ... I've been eyeing them for about two months now on Ebay, the retailer only had two left in stock and I kept putting off buying them but something told me to go ahead and get them so $20 bux later I've got the last two in his inventory. 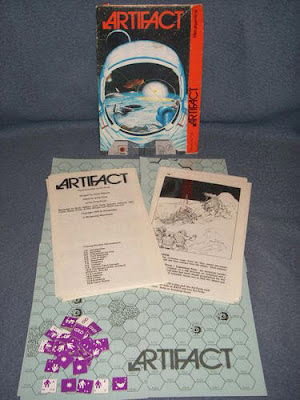 Ah, the joys of Microgaming.  Take a dollar or two,
add in pen and paper and dice ... and imagination.

One of my dioramas that I've put on the back burner is the scene from Metagaming's Microgame "Artifact" ... here is the scene in all of its two color ink and paper glory. 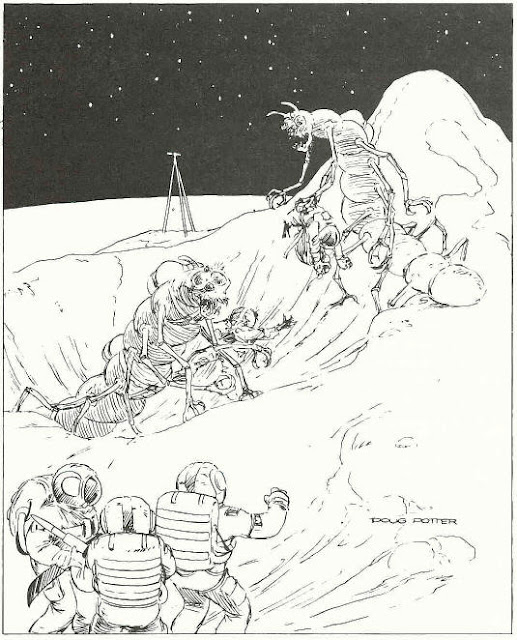 Doug Potter's grisly depiction of American astronauts chancing upon the remains of an American Lunar Survey Team killed by Aliens trying to reclaim the mysterious "dingus" ... an artifact of XT origin which puts out more energy than goes into it.  I've wanted to make a diorama of this scene for many years now but just never had any suitable creatures to model the aliens on ... and now I do.


Pair these necrovorous worms with some detailing, some cobbled together backpacks, maybe some classic bubble helmets, an alien killing sphere or two and some kitbashing courtesy of some old Airfix 1:72 scale NASA Astronauts and this diorama is back to the forefront of the work bench. 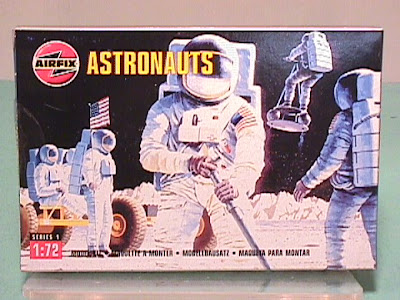 Of course the scale is going to be off somewhat  ... the aliens in the diorama will probably be the same size or slightly larger than the astronauts but no where near as big as they seem to be in the illustration above.

On the other hand ... I do have some Ground Zero Games 15mm miniatures ... heavy EVA suited astronauts (loosely based on the Moebius design of EVA suit first seen in 1979's "ALIEN") and some of them are armed as well.  Some are even in zero grav floating poses (no base) so I may use those instead since the size difference between a 25mm necrovorous worm and a 15mm heavy EVA suited astronaut might just be what I'm looking for while still keeping the diorama small (under a square foot).

"You can have my dingus when you pry it from my cold, dead alien hands."

No problem, ET.  Happy to oblige.  We'll take it from here for God, Mom and Apple Pie!