Everything about toys changed in 1977 when “Star Wars” hit the big screen … just as “Star Wars” changed the way we thought about science fiction and movies in general, George Lucas’ epic space fantasy also changed the way that we thought about and bought toys.  Everyone wanted to cash in on a piece of the tasty marketing pie that Lucas had served up steaming hot and fresh in May of ‘77, even an old family game maker Milton Bradley.

Suddenly science fiction was cool … and extremely profitable … but what could a board game maker like Milton Bradley bring to a table that was already getting crowded by everyone and their mother trying to cash in on the sci-fi craze?

Plenty and it all revolved around that oh so ‘70’s buzzword … electronic. 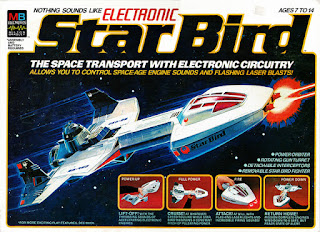 Enter Milton Bradley’s bid for their slice of the science fiction super nova … Star Bird: The Space Transport with electronic circuitry – one of the first of many such toys in the late 1970’s and one which I was lucky enough to own (and still own).

Milton Bradley’s Star Bird was a really cool toy and simple to operate (if not just a bit annoying to your parents or other adults in the play area).  A single 9volt battery went into a compartment just behind the front laser guns and in front of the massive speaker while a simple on/off switch turned Star Bird to active or inactive duty.  As soon as you flipped that little black toggle switch, the whole toy emitted a deep throbbing hum and depending on whether you tilted the nose of the Star Bird up or down, that throbbing hum would either increase in pitch to an ear crying whine or decrease in pitch to an even deeper throbbing hum.  Once you had the pitch that you desired, you could level the Star Bird off and it would maintain that sound for as long as you held it steady.  If, during your cruising of the galaxy, a hostile element appear in your path then a big gray button on the neck of the hull, right behind the cockpit, triggered the front mounted twin LED laser cannons which would pulse / flash red and emit high pitched laser-like sounds.

If those electronic strengths weren’t enough, Star Bird was full of other play features.

The front cockpit and the rear main engine could both be pulled off and fitted together to form a type of smaller, arrowhead shaped fighter with all the sound FX.  Slide the front cockpit cover off to expose the main laser / battery compartment / speaker assembly and you had yet another sub-fighter array / play configuration … this one with a cockpit canopy which was little more than a flat sticker.

The wing tips of the main body were actually small space fighters labeled “Interceptor-1” and “Interceptor-2” that could be removed for either escort duty or to add their attack capacity to whatever cosmic foe Star Bird was valiantly facing at the time.

World War 2 made gun turrets sexy and during the 1940’s and 1950’s the gun turret was a staple of most large military aircraft … waxing to nostalgia during the 1960’s and 1970’s but “Star Wars” made the gun turret sexy again.  Han Solo’s Millennium Falcon with its dual pom-pom laser turrets made it a requirement for any self-respecting sci-fi space ship to have at least one gun turret (or two) and so the last play feature in the design was a double barreled laser gun mounted on top of a ball turret on top of the main body.  Looking at the arc of fire of the turret, it would probably be a very good idea to launch the wing mounted Interceptors before ever opening fire with the double barreled laser guns on the turret otherwise you were going to have some collateral damage / friendly fire to explain to the head brass back at the Command Base.  Also, it should be noted that the design of the ball turret was more than a little similar in appearance to the Imperial Death Star.  The ball turret could also be removed and used as an escape pod … another piece of hardware made famous by “Star Wars.”

Star Bird was billed as a “transport”, albeit a pretty well armed one with its dual wing mounted Interceptors, twin laser gun turret and those big flashing laser pulse cannons up front.  You had to begin to wonder just what it was that Star Bird transported and what would need so much firepower to protect.  In fact, looking at the overall design, I guess it didn’t have very much room to carry stuff so as a child I always thought of the Star Bird more as a Pony Express than say, an 18 wheeler.  Remembering a line from “Star Wars” in 1977, I thought of the Star Bird as a “councilor’s ship”, a diplomatic transport, high speed and heavily armed … designed to get VIPs into and out of bad situations.  In that regard, at least in my mind, Star Bird was very much like Princess Leia’s own Tantive IV Corellian Corvette (i.e. the hammerheaded “blockade runner”).  I even spent a couple of days one summer tracing the outline of the Star Bird and its parts and drawing out the interior … deck by deck, and created a kind of “Star Bird Owners Manual” complete with facts and statistics on the imaginary capabilities of the toy.  It was a whimsical exercise in imagination for a 9 year old and garnered the admiration and praise from my close group of friends but sadly that spiral bound notebook and those drawings are long since lost to the passage of time.

Maybe I’ll do them again one day, improving upon the design as the Star Bird is one ship that would definitely make a good project for blueprints. 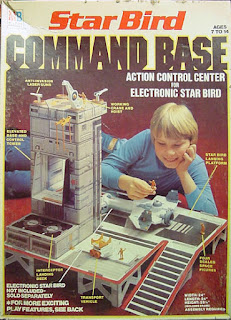 The Command Base was another vast canvas for your imagination to roam and play on, sized to the Star Bird itself and loaded with Star Bird support features; the Command Base resembled something right out of a Chris Foss or Peter Elson painting.  Sit it on the sand of a beach with the waves crashing in the background or in a shady patch of lichen covered ground in your backyard and the Command Base could have been built on just about any alien planet your imagination could come up with.

Features of the Command Base included a transport vehicle designed to act as a dolly to carry the removable engine core of the Star Bird, an Interceptor landing deck with two marked slots to slide the removable wing-tip mounted Interceptors into, a working winch which could be used to lift the engine (and engine cradle) from the transport vehicle up into the open service bay, dual high mounted anti-invasion laser guns (which were simply much larger versions of the turret mounted double barrel laser guns on the Star Bird) and last of all four “scaled” space figures (all in the same “howdy” pose) though it was obvious that these “scaled” space figures would never be able to fit inside either the ball turret of the Star Bird or the cockpits of the wing-mounted Interceptors so what Milton Bradley meant when they used the term “scaled” I’m not sure of.

Later offerings from Uncle Milton included a revamped version of the Star Bird packaged and sold as the Star Bird Avenger.  The Avenger had different decals, darker windows on the front and upgraded electronics which could send and receive infra-red signals (like those found in a television remote).  Kids could now fire their Avenger’s pulse laser cannons at a special (included) target and register a “hit” against the target.

Shortly thereafter, Star Bird got its first real adversary in the addition of the Star Bird Intruder to the toy lineup.  Shamelessly, the Intruder was a lackluster (but rare) toy thrown together with little or no imagination from existing parts and molds of the Star Bird line.  The Intruder was simply the front part of the Star Bird / Avenger toy with a much shorter rear section and it was painted black with alien type decals.  Possessing the same electronic upgrades as the Avenger, the Intruder and the Avenger could dogfight in a fashion that was a precursor to laser-tag in that if a “hit” was scored on the other toy it would signal that hit through its electronic suite and by making a different sound.  After the Intruder was introduced, the Star Bird line faded into the pages of toy history, its chapter having run from 1979 to 1981 and it had been a good run.

Today, my Star Bird (original) and Command Base sit on a shelf, in their original (tattered) boxes, like somewhat tarnished trophies from my youth.  Every few years I get the Star Bird down, unbox it, connect a 9volt battery and flip the on/off switch to bring the old spaceship back to life.  For a few wonderful minutes I relive a cherished memory from my childhood.  Invariably, the electronic sound of the Star Bird’s warbling engine along with its pulsating LED laser cannons brings my curious daughters running to daddy’s study to see what I have resurrected and soon I’m watching the ancient Star Bird disappearing down the hall in the hands of my two girls, riding the waves of their imaginations.

Seeing my two daughters run around my house with my Star Bird whining it’s engines at full load, pulse lasers flashing and screaming, girls giggling and taking turns with the toy spaceship makes me realize that some toys really are timeless … some toys have the power to cross generations and make the children of tomorrow, the children of yesterday’s children, smile … and Milton Bradley’s Star Bird was just such a toy.

During the Summer of 2013, I took my vintage Starbird and Command Base from my study at home and put them on display in my office at work.  I even put a 9 volt battery in the Starbird and let her howl and blast her lasers for a bit.  Here's a picture of my classic toys ... the boxes are stored in the cabinets below.  I also seem to be missing one of the 'arms' for the crane and a spaceman.  Time to mount a safari on Ebay for replacement parts.  One of my modeling projects is to redo the Command Base entirely in foam board, update it a little and have a modern take on the old toy.  One of the main parts of the redesign is to make it where the angles get right ... i.e. you can see all of the base from one angle. 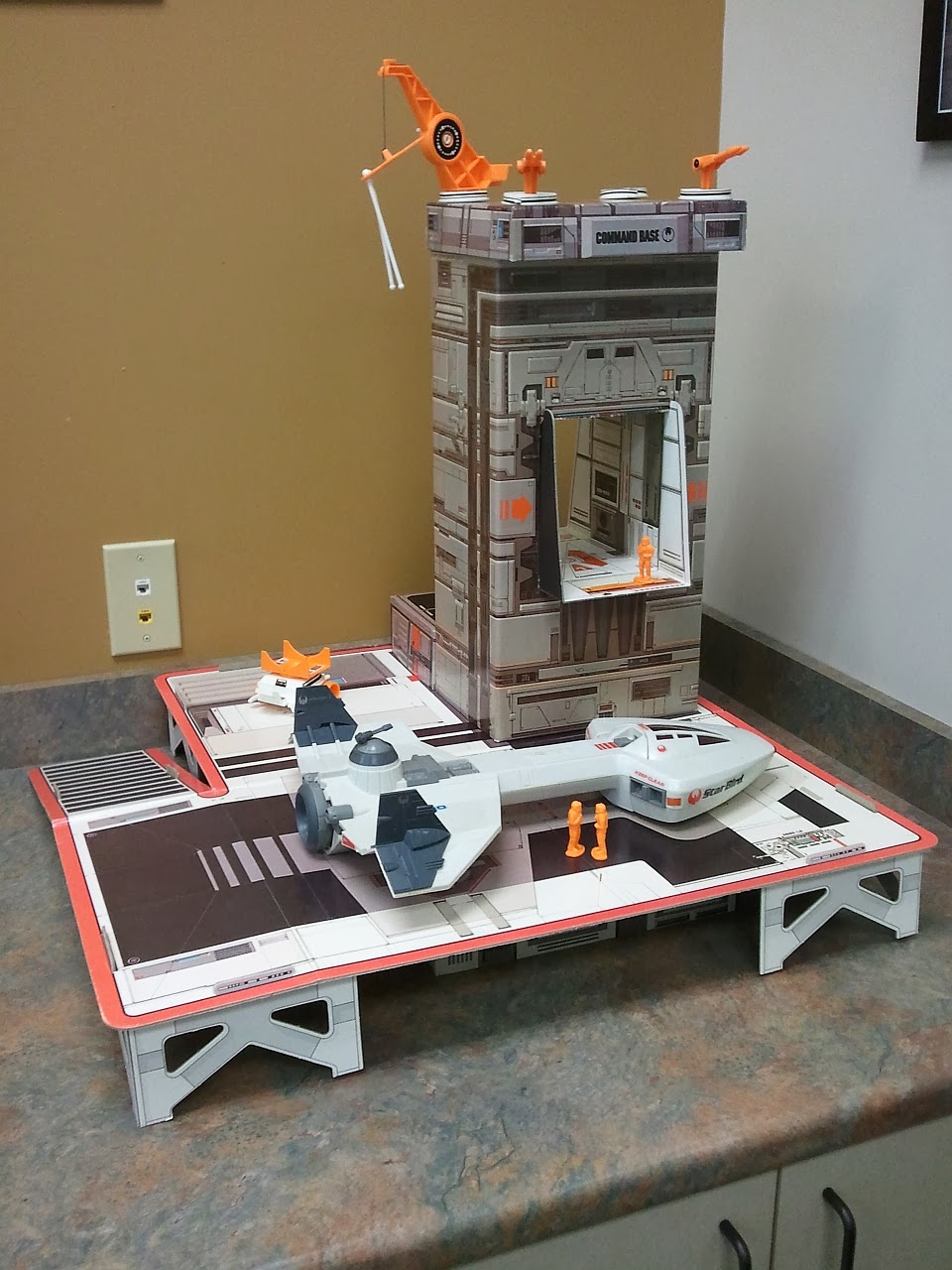 Posted by Christopher T. Shields at 12:03 AM