"Are you there, God? Come on out! I got a bone to pick with you! A bone -- hah! That's a good one! I got a million bones to pick with you, pal! All the bones in the world! This is all your fault! That's right! You coulda stopped it -- why didn't you? Eh? You're so all-damn powerful, why didn't you do something? Have you seen what it's like out there? Have you? Well, I'll tell you, pal! If there is a God then you gotta be one twisted, evil son of a bitch! Damn you! Come on! I'm not afraid of you! Strike me down! Gimme the big zap! What are you waiting for? Had enough death? Sickened even yourself? Don't worry! You'll be doing me a favor! I don't any part of this. I don't want to be the last American..."  -- Ulysses S. Pilgrim 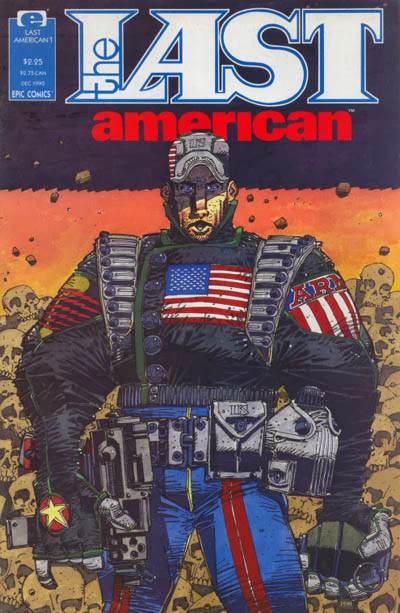 "The Last American" (hereby abbreviated TLA for brevity’s sake) was a four issue comic written by John Wagner and Alan Grant with two issues being done by each author supposedly at the end of their professional relationship (a relationship that was rapidly sinking against the jagged rocks of artistic differences).

Mike McMahon was the artist for all four issues.

Published by Epic Comics from December of 1990 to March of 1991, TLA was a four issue limited run that left off with a slightly open-ending.  I became interested in this particular work for the primary reason that it fulfilled two of my strongest fascinations … waking up from long term suspended animation in a strange, new world (ala Rip Van Winkle) and the post apocalypse.  I've always been fascinated with stories about ordinary people thrust into environments beyond their control and often times beyond their understanding.

The story of TLA centers on Ulysses S. Pilgrim, a disgraced US Army soldier in military prison for some unknown but obviously severe crime.  Pilgrim is chosen to be the last American, a project which will put him in suspended animation for 20 years deep inside a hardened bunker in order to (hopefully) survive World War III.  At the time of Pilgrim being chosen for the project, for whatever reasons, global nuclear war is imminent and unavoidable and time is running out.  Pilgrim is whisked away from his family, put into the bunker with enough supplies to weather the coming war, and given the task of waking up in 20 years to begin the rebuilding the United States of America.


The story begins on July 4, 2019, at twelve noon, twenty years after the nuclear war.   Pilgrim wakes up in a bunker, attended to by a likable robot valet / Man-Friday named “Charlie” who is obsessed with pop culture (the robot has had twenty years to absorb all the substantial archive of recorded pop media that the bunker has to offer) as well as two large, gruff, all business-like, no-nonsense combat robots named “Able” and “Baker” (A, B, and C for you non-military types).  Charlie serves as Pilgrim’s personal valet and as a go-between for Pilgrim and the two combat robots.

Pilgrim’s first questions when he wakes up is “Who won?”  Before he can receive an answer from Charlie he admonishes himself that what he just asked was a pretty stupid question, in hind sight.

Waking up and leaving the bunker, Pilgrim and his three robot companions travel the devastated America in a large, squat, armored ATV.  They find nothing but destruction and desolation.  Along the way, Pilgrim has flashbacks and memories of his life before he went into suspended animation.  We learn of the life he left behind, his wife, his young son.  He pines for them during his travels, even almost visiting the place where he and his wife first met by accident (he ran over her bicycle with his VW bug).  Along the way, the destruction and devastation are so great that Pilgrim has trouble dealing with the immensity of the fate of the human race.

When offered a bottle of whiskey he proceeds to get drunk and curse God.  His fourth travelling companion, a hallucination, a figment of his imagination, is Bert the Turtle from the old Civil Defense films of the 1950’s.  Bert becomes his best friend and talks to him all the time, often serving as a filter to help Pilgrim understand the situation that he is in and the situations that he finds himself in.  This seems to upset the two combat robots and concerns Charlie who sees Pilgrim’s continual backwards mental slide as some kind of failure on Charlie’s part to take care of Pilgrim during his 20 year long hibernation.

Charlie: "Oh, Doctor Kildare!  You're so handsome when you diagnose!"

Able:  "Come to that.  I'd be worried about YOUR state of health."

With only four issues to tell a story I won’t ruin it by giving a complete summary of the story, suffice to say that if you like post-apocalyptic stories then TLA is a little bundle of pure PA candy.

TLA is a great post-apocalyptic treasure and at just four issues it doesn’t take a deep wallet to add it to your collection or a lot of time to add it to your memories.  The designs of the robots and the ATV are solid if a bit whimsical but Pilgrim’s uniform looks more for show than actual use.  He is a caricature of America, even more so than Uncle Sam ever was.

All in all, TLA is solid and is one of those lost gems that would make a great movie, even if it only made it as a low budget, CGI heavy movie in the same league as most Sci-Fi channel movies.  Hell, you could make this movie with only a handful of people and I'd suggest the more less well-known the better.  The robots would be simple to build or even easier to just CGI together, ditto for the ATV and the PA backdrops.
Posted by Christopher T. Shields at 7:24 PM