Feeling in a vegetative mood I decided to blow the dust off the old "DA" DVD, throw it in the XBox 360 and take it for another spin after all these years.  I was not disappointed.  Sure "DA" has problems and loop holes but tha's what makes it what it is.  The effects are dated but "DA" is still a solid "B" movie.  Never intended to do anything but entertain a viewer with their mind solidly thrown into neutral, "DA" lives up to expectations and remains a cherished part of my post-apocalyptic media collection. 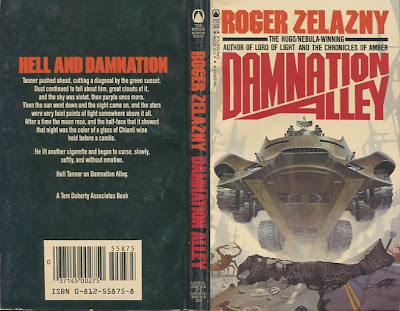 "Damnation Alley", by Roger Zelazny, was originally written as a novella in 1967, turned into a novel in 1969 (the year I was born) and then made into a movie based very, very, very loosely on the book in 1977 (the year that "Star Wars" first hit the big screen).  The book illustrated above is the edition that I first owned and read in the mid-1980's, a time when post-apocalyptic drama was in high demand.  I'm pretty sure I still have this novel in my extensive collection, I see no reason why I would have ever gotten rid of it ... it's a great story full of post-apocalyptic wonder and like so many facets of my childhood I like to revisit it every decade or so just to kick the tires and do a few smokey burnouts down "Memory Lane".

All in all, "Damnation Alley" is another example of the cliche where someone says "the book was a lot better than the movie."  In this case, it is true.  Damnation Alley was a pretty cool movie, all given, but it had very little to do with Zelazny's book and by "very little" I mean that it took the basic premise of post apocalyptic mayhem, took the name of the main character and used the idea of driving an armored car across a blasted American wasteland and ... yeah, the rest of it they just kind of made up. 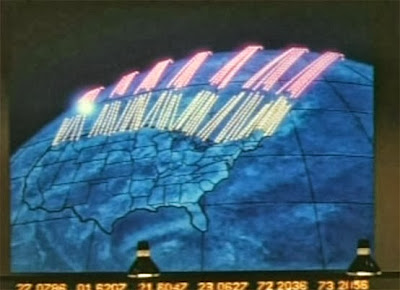 The one part of the movie, where the big war board shows all of the Russian ICBMs coming over the pole to hit American targets, the launching of the retalitory strike and the different canned film footage of nuclear explosions ... that's how we all thought that we would go, probably in our sleep at a few minutes till midnight but in the 1970's and early 1980's that's pretty much how we figured the human race would end. 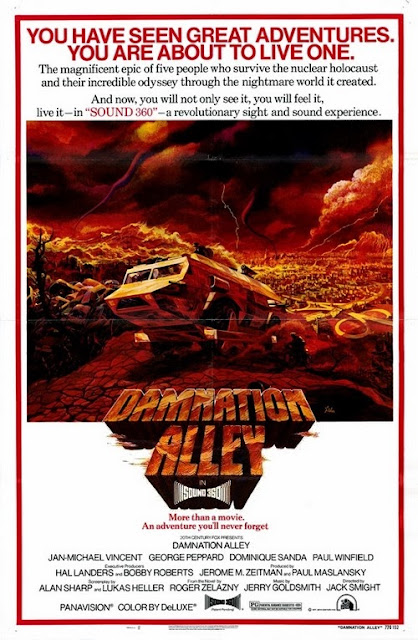 As far as action movies go, "DA" is a good 1970's film and it begs, just begs to be remade in this era of "let's remake everything because we've run out of original ideas".  Of course I'd like a more faithful to the book version but then that's just me.

What PA movie wouldn't be complete without some
mutated giant scorpions to cause our heroes grief?


Probably the most iconic thing to come out of "DA" the movie is the armored vehicle that our heroes travel across "Damnation Alley" in ... the "Landmaster".  Long a popular sci-fi vehicle, the "Landmaster" was a twelve wheeled ATV that was armored, was NBC sealed, had a segmented body, could drive with either set of wheels out of commission, had six heavy machine guns, a pair of rocket launchers in an upper turret, full communications suite, a side hatch, a top hatch, a rear ramp that could raise and lower, room for four, bunks, a shower, food and water for extended periods of time and could use standard semi truck parts to repair its power / drive train components. 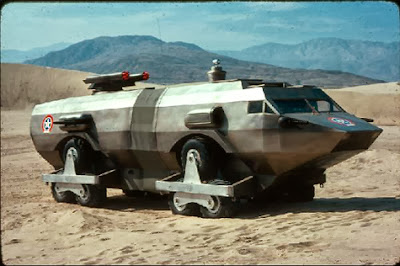 The original story struck me as perhaps being the spiritual forerunner of John Carpenter's "Escape from New York."  You had Hell Tanner, the last of the Hell's Angels, living in a post apocalyptic California.  He's one of the last of the true bad asses, he's in prison, and he's offered a parole by the governor if he'll run some antidote or serum across country to Boston (or some other blue state Yankee stronghold) that has come down with some disease.  Since it is post WW3 and all humans are precious, California decides to send the medicine in several armored cars (referred to simply as "cars").  These "cars" are awesome armored, fully armed, fully supplied all terrain transports with flame throwers, fifty caliber heavy machine guns, grenade launchers, rockets and two giant blades that can slice out from each side.  In order to earn his pardon, Hell Tanner has to make the run through Damnation Alley, a narrow belt of less-destroyed America plagued with giant insects, giant scorpions, bandits, radiation, and terrific mega-storms.  I won't tell you any more, if you haven't read it, read it.

You can pick it up cheap at most used book stores.