Now, looking through the toy section of a local "Big Lots" the other day I found this toy gun set and the revolver intrigued me as a cheap find to kitbash a "Slammer" together (the combination revolver / semi-automatic weapon found in Geoff Darrow and Frank Miller's cyberpunk Where's Waldo epic "Hardboiled") ...  When I picked up the toy gun set to look at the revolver I discovered that not only was it way too small for the scale that I was interested in modeling ... but I noticed that it had a third gen Firebird emblem stamped into the plastic near the hammer and cylinder. 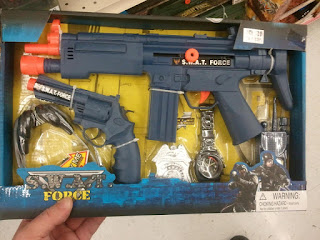 You can see the third gen Firebird symbol stamped into the revolver between the trigger and the cylinder release button.  Here's a closeup of the image. 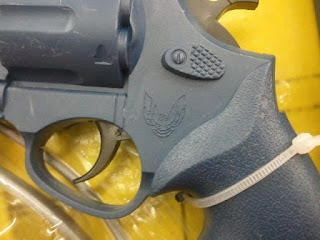 And here's the actual 3rd Generation Firebird logo for comparison ... you be the judge.

My guess is that the toy was made in China or some other country by some cheap manufacturer who wanted to include a "Ruger Redhawk" or "Ruger Blackhawk" revolver in the playset but didn't want to get sued by the Ruger company so they had one of their employees look on the Internet for a bird outline and found this instead.  It's the only reason why I can think that the third generation Firebird logo ever managed to wind up stamped into the side of a cheap toy gun.
Posted by Christopher T. Shields at 2:09 AM

Email ThisBlogThis!Share to TwitterShare to FacebookShare to Pinterest
Labels: Tales from the Driver's Seat, Trans Am
Newer Post Older Post Home
Updated semi-infrequently and nearly sometimes. Deal with it.