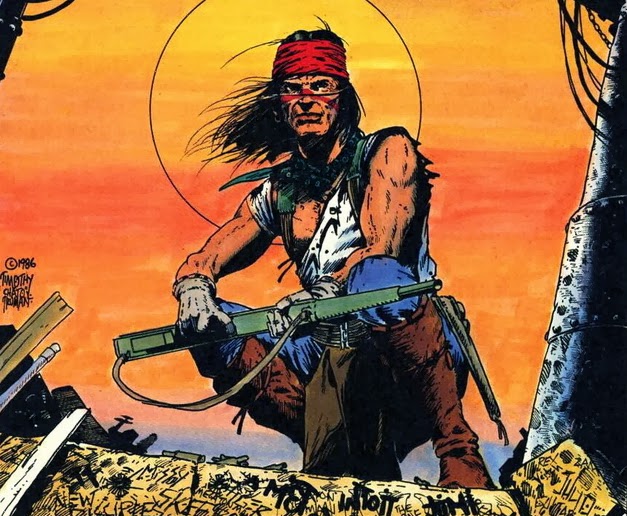 “Scout” is probably one of my all-time favorite series of comic books, written by artist and guitarist Timothy Truman and published by the stinky hippy managed, ill-fated Eclipse Comics which was itself an independent bastion during the “Direct Distributing” years taking on the likes of Marvel and DC.  “Scout” debuted back in September of 1985 and at that time I was just sixteen and a junior in high school.  Now, when it comes to comic books I’m not big on super heroes … I was far less a “Superman” kind of comic book fan than I was a fan of comics like “The Unknown Soldier”, “Sergeant Rock”, “The Losers”, “Weird War Tales” and the various horror comics.  Comics and I parted ways for a while, several years in fact, and when we met back up my interest in comics had changed considerably. 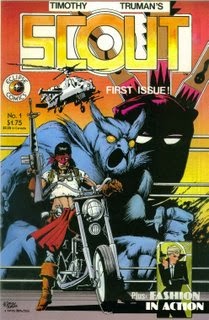 “Scout” piqued my interest because it had relevant issues in a time when those issues were still both relevant and a possible outcome to (then) current events.  I know that sounds kind of like a cop-out but “Scout” hit hard and it hit true, for the time that it came out swinging.  The series took place in the (then) year of 1999 in a story setting where the United States had been knocked far down the world political power ladder.  America was being punished for years of ecological waste with heavy sanctions levied against it by the other countries of the world (kind of like Germany was punished at the end of World War I).  Despite all the liberal guilt based background, the actual story followed the spiritual quest of a Native American Apache Indian by the name of Emmanuel Santana (who was actually named for Carlos Santana, the musician, which Truman was friends with).

Santana was an ex-US Army Ranger on a spiritual mission to destroy several mythical monsters of Native American folklore that had come to plague the land.  These monsters could take on human form and thus infiltrate various power structures of our once great country.  This particular quest comprised the first seven issues of the series, after that, the series got pretty serious up until the 24th issue which ended the first series.  Along the way, Santana is reunited with an ex-lover, Rosanna Winter (also a US Army Ranger who, along with her psycho Ranger teammate Raymond, is tasked with hunting down Santana).  Santana also meets up with Beau Le Duke (a gun toting, beer guzzling, bearded real man’s man), Monday the Eliminator (who is a mostly immortal warrior created back in the time of the Greeks) and a mercenary group called “The Swords of Texas.”

(Rosanna Winter would have her own off-shoot series, four issues, in the “New America” collection and “The Swords of Texas” got their own four issue mini-series as well to bridge the gap between the first series of “Scout” and the second series.)

“Scout” was gritty from the start, and it had a rough, shaky start to be sure.  When I first read it I noticed that it had that kind of Pepe Moreno “Rebel” feel to it (and I’ll discuss Moreno’s “Rebel” and “Generation X” in followup postings).  Originally published bi-monthly, “Scout” was later announced to being rescheduled as a monthly series.  “Scout” had a lot of growing pains and I was there for its birth as well as its whole life run.  “Scout”, in one form or another, was published from the fall of 1985 to the summer of 1989 and it was an epic run for a comic.  Equipment and hardware in the series were period specific and easily recognizable to anyone who followed pop culture action shows or movies … Monday the Eliminator preferred to carry a Franchi SPAS-12 shotgun (the iconic shotgun of the 1980s) and later had a cybernetic eye implanted so he could chip into a 5.56mm “smartgun” (itself a heavily modified M60).

Emanuel Santana carried an Israeli made 9mm Uzi submachinegun (the iconic SMG of the 1980’s) and in the first few issues a Automag .44 caliber automatic magnum (much like Clint Eastwood’s character “Dirty Harry” used in the movie “Sudden Impact”).  Later a Colt .357 Python magnum revolver with a ribbed barrel was included and Scout carried a 5.56mm Colt M16, a H&K CAWS automatic 12 gauge combat shotgun, a 7.62mm FN FAL battle rifle, hand grenades, knives and later in the series, a British made .303 Lee Enfield bolt action rifle of WW2 origin.  Emanuel Santana’s outfit was a mixture of pop culture (a leather jacket with an American flag on the back), military surplus (his duty belt, holsters, and fanny packs) and traditional tribal Native American fashion (bandannas, war paint, groin cloth and boots).  He rode a Harley Davidson Sportster … that ever so ridiculous icon of 1980’s faux motorcycling because back then (and to a lesser extent today) Harleys were considered “cool” and “tough” even if they could live up to neither aspect of their pop culture reputation.

What made the comic interesting besides the ingredients that went into the comic itself was the fact that not only was Timothy Truman a musician but he put a lot of music into his comic as well.  One of the characters that Santana encounters is called “Guitar Man” and it is “Guitar Man” who plays his Fender Stratocaster loudly while the enemy base is burning around him.  “Guitar Man” always seemed to be the embodiment of Jimi Hendrix, at least to me; that’s the vibe that I got from that character.   Missy, a woman that Santana rescues early in the series, goes on to become a pop star with her own band.  In this way, the comic had that kind of “Streets of Fire” feel to it.  In issue number 16, Truman even included a flexi-disc record that you could play on your record player (some of you won’t know what that is) … a two song soundtrack for the comic itself. 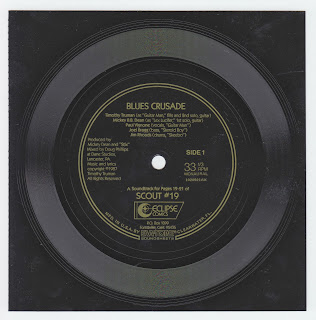 After a brief respite from the comic, Timothy Truman and his band “The Dixie Pistols” cut a vinyl record of blues rock that was inspired by the comic itself, another first and this time a LP based soundtrack to a comic book. 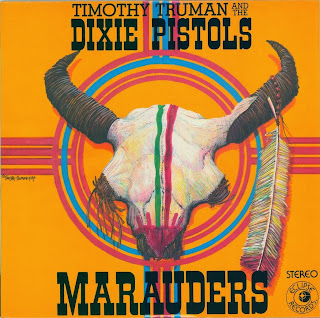 The record included a mini-comic detailing some of the events after the first 24 issue “Scout” series concluded, namely the marriage of Santana.  Santana found a wife, was married, had two sons, his wife died, and he went back to traveling the devastated America with his sons.  The mini-comic paved the way for the introduction of the second full length series and sequel to the first; “Scout: War Shaman”. 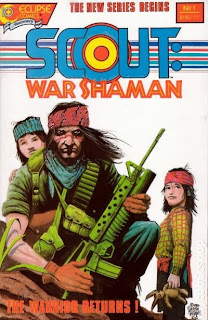 That series lasted sixteen issues and ended with the death of Emanuel Santana.

During this time, two other “Scout” series were produced; “New America” which chronicled Rosa Winter’s violent rise to American political power and “The Swords of Texas” which told the story of the mercenary group that had played a big part in helping Emanuel Santana. 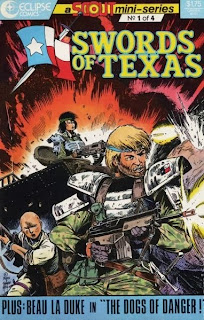 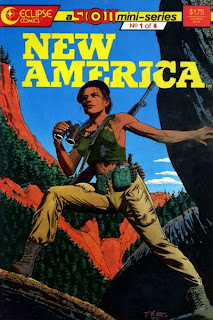 There was even a technical manual / handbook published which detailed and gave the specs for all of the equipment that Scout and his friends used in the series as well as profiles, maps, etc.  One of the neater vehicles introduced in the series was the Israeli giant mecha called "Big Moishe". 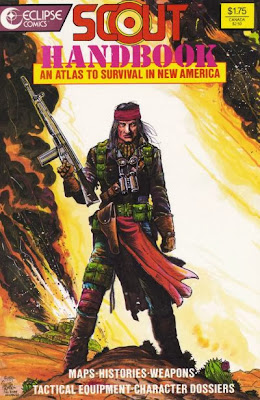 “Scout” was one of those iconic comics that, if you got onboard with the first issue and managed to hang on until the end then it was an epic ride and one of those kind of artistic events that you “had to be there for” otherwise you just couldn’t really get the feel of what it was like to have been part of it.  Today, finding all of the issues let alone the flexi-disc and the vinyl album by The Dixie Pistols would be a real grail quest.  I’m glad that I’ve got all of my original stuff and every few years I sit down and revisit Emanuel Santana’s journey through the Second American Civil War, throw my Dixie Pistols vinyl album on the old turn table and just lose myself in some great childhood memories.

I guess what strikes me as interesting is that as I’m writing this it has now been 28 years since I first picked up my first issue of Truman’s “Scout” at Brendon’s comic shop there on Hardy Street in Hattiesburg back when he had opened a shop right next to the hobby shop.  Twenty-eight years ago, way back in September of 1985, I was sixteen years old and the year 1999 was still so far away that it might never be reached.  1999 was a mythical, magical year.  Warren Publishing had an entire series of adult graphic magazines sold under the “1999” banner.  There was “Space: 1999” the old TV show from the 1970’s where the Moon was blown out of orbit by a nuclear chain reaction and went hurtling off into space on adventures every week and the pop artist Prince wanted us to party like it was 1999 in his hit song.

What is interesting, though, is that way back in 1985, at fourteen years in the future, the year 1999 was as far ahead of us (then) as 1999 is behind us (now) in 2013.  Think about it … Not only did we make it through the long fourteen year climb up to 1999 but the world didn’t end either and, now that we are the same amount of time and distance on the other side of 1999 as we were in front of 1999 way back in 1985 it is interesting to stop, take a deep breath, and look back at just how far we have come as well as what our expectations of our future once were.

The future isn’t what it used to be and that may not be a bad thing.  For all the troubles that this once great nation now has, for all the wrong choices that it has made politically in the last five years, thankfully, this once great nation doesn’t resemble the nightmarish hell that the United States in Emanuel Santana’s time is portrayed as.
There isn’t a Second American Civil War … at least not yet.

So if you’re like me and you like finding new and interesting stuff then I’ve got a real grail quest for you.   I've got all of my Scout series, extras, flexi-disc and vinyl record.  How about you?