Growing up in the early 1970’s was a really fun time.  It was a time of military toys and my Christmas wish lists would have been the stuff of any bleeding heart liberal parents’ nightmares.  I grew up playing with war toys and toys which represented not only violence but organized violence and mass destruction on a scale which had boundaries only limited by my young imagination.  I grew up building plastic models of bombers, fighter planes, naval warships and armored vehicles (Monogram rocked hard during this time and Sheppard Paine was my modeling hero).


I grew up checking out library books on World War Two, Korea, Vietnam, and anything that had weapons or combat in it.  I grew up playing with cap guns, dart guns, tracer disc guns, BB guns and fireworks and burning stuff with gasoline or any other flammable incendiary liquid that I could get my hands on.  I grew up pretending to kill my friends in games of "guns", using my imagination to gun them down in vacant lots, half-built houses and the woods down the street.  We built forts in the woods and turned tree houses into fortresses.  It was run and gun, jumping ditches, hiding in culverts, playing in the woods, vacant lots and half-built houses of my still unfinished neighborhood.  When my friends couldn’t come out to play or it was raining, I turned to some of the greatest toys ever created … “army men” made by a lot of different companies but the greatest "army men" of all time were those made by the Marx Toy Company.

I remember 1973 to 1977 being my really big green army men days when I had buckets and tubs full of Marx military playsets and figures.  I had played a lot with the MPC / Timmee bagged sets of military soldiers (the Vietnam era green figures with the M16s, Bazooka, Flamethrower and mortar) and generic 1960’s era tanks but then my parents bought me a present for my 6th birthday that was one of the greatest presents ever … the Marx Battleground Playset.  It was freaking huge!  The box I could barely hold and it included more pieces than I could count! 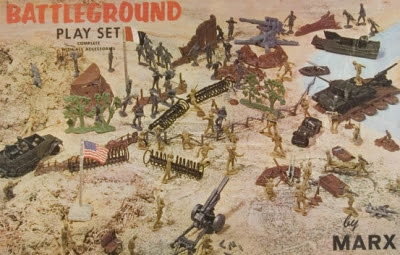 There was a tank, a small towed cannon, a big 155mm howitzer, a 88mm Flak gun, a half track, a jeep, a landing craft with drop down ramp and twin MG turret, a raft, a two piece pontoon bridge, twin flag poles … there was barb wire fences, rolled barb wire, trees, ruins, a damaged pillbox, sandbag emplacements, a recoilless rifle on a tripod, lots of crates, a table with a radio … more soldiers than you could carry in both of your arms held tight and, sweet mother of plastic there were accessory weapons … not exactly to scale but who cared!  You had spare tommy guns, hand grenades, BARs, grease guns, M3 carbines, and Colt .45 pistols … all manner of battlefield accessories you could pull off of a sprue and give to your soldiers to pretend to carry or to place around the battlefield and have your soldiers capture.

Basically, the Marx Battlefield Playset was countless hours of solitary fun in a box and it was worth every single penny that my parents paid for it.  I’d lose myself in the den playing on a battlefield of deep shag carpet or across the great divide that separated my two single beds in my room.  A seasonal visit to my cousins in Virginia netted me my first experience with Airfix military figures … these were far more detailed than the Marx figures (and a good bit more expensive) but I went home with some World War II British desert soldiers and some Russian soldiers, marveling at their weapons and equipment.

I lived for those little green army men during those early years of my life and my imagination ran wild, creating battlefields in my parents’ den (we had shag carpet), across the Great Divide that was the space between my oppositely opposed single beds and outside in the sand box (where you could make some really cool beach assaults and hand-built fortifications).

All of that ceaseless warfare began to wane in late 1976 and early 1977 as my interest in science fiction began to grow.  Little did I know that in May of 1977 George Lucas’ “Star Wars” would become a veritable science fiction supernova in my life, catching me totally by surprise and unleashing the boundaries of my imagination in ways that the poor Marx company never had before.

But in the fall of 1976 that was still months away and not even on my radar yet and I was still playing with my green army men.  My last big hurrah with the Marx military playsets was the granddaddy of them all … the Navarone Playset which I received as a gift on Christmas, 1976. 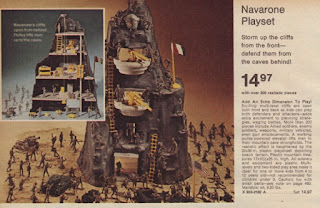 I’d watched “The Guns of Navarone” with Gregory Peck a few years before and now I had a playset of that!  Well, there wasn’t Gregory Peck or any of the other commandos but the Navarone Playset had a lot more than I’d ever had before … including German figures and wounded Germans … and I had a huge mountain with two giant cannons to assault.  As far as figures and vehicles went, it was more of the same from the older Battlefield Playset only without a lot of the accessories like the extra weapons and landscape items.  The German figures, again, were new to me and a welcome addition to my battles.

Strangely enough, the Christmas that I got the Marx Navarone Playset I also received another coveted childhood toy … the Mattel Space 1999 Eagle Transporter with its three tiny Alphan figures (a prelude to what was to come from Kenner later with their Star Wars line). 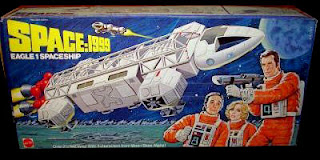 I guess if you’re going to transition from green army men and Marx military playsets to science fiction, the Mattel Space 1999: Eagle 1 Transporter was about as good a toy as any to carry you there.
Posted by Christopher T. Shields at 10:36 AM